Nix comments on his records being broken 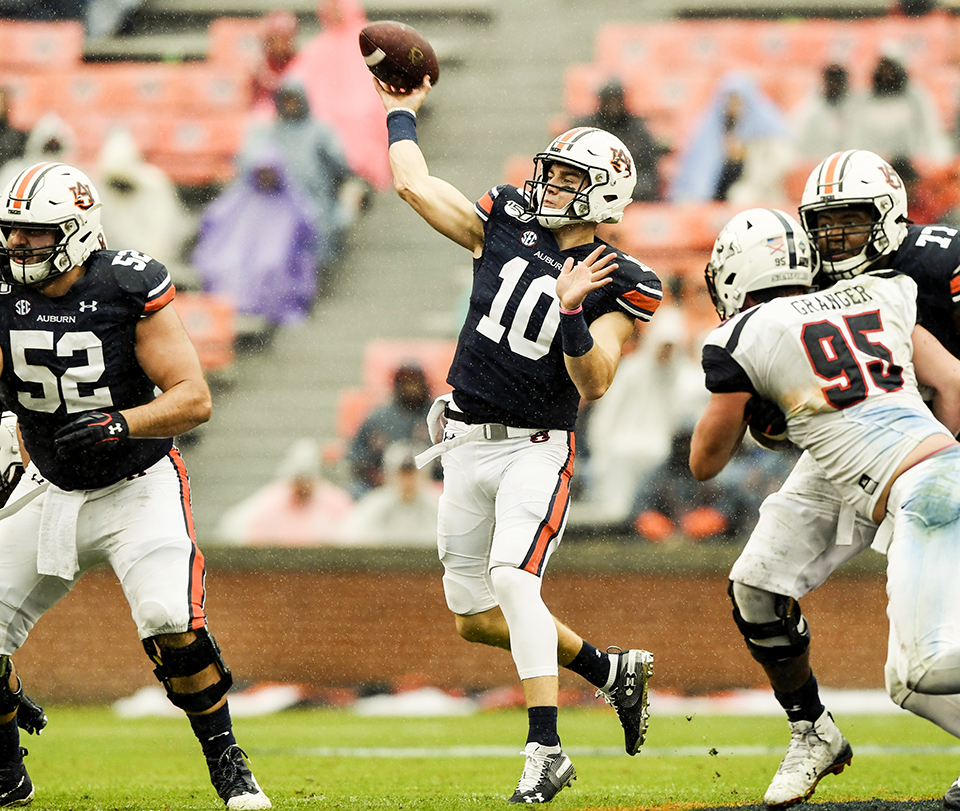 Bo Nix (10) makes a throw in the first half. Auburn Football vs Samford on Saturday, Nov. 23, 2019 in Auburn, Ala. Todd Van Emst/AU Athletics

AUBURN –Auburn quarterback Bo Nix had an eventful weekend both in terms of having his high school career passing records broken and setting some records for an Auburn freshman quarterback.

While in the interview room following Auburn’s 52-0 win over Samford on Saturday, Nix was informed that two of his high school state records had been broken on Friday.

It was Lanett High’s Kristian Story in Friday’s 41-21 playoff win over Isabella.

“Congratulations to him,” Nix said. “I know from my own experience that there’s so much practice you have to go through, so much game preparation and so many snaps involved in setting records like that. You couldn’t do it without great help from your teammates and coaches. Congratulations to Kristian. I feel good for him.”

One thing Nix and Story have in common is that they were coached by their dads. Bo dad, former Auburn quarterback Patrick Nix, is the head coach at Pinson Valley High School near Birmingham. The father-and-son tandem led the Indians to back-to-back 6A state titles in 2017 and 2018. This year’s team is in this week’s semifinals.

Kristian’s dad, Clifford Story, was a star quarterback for LaFayette High in the early 1990s and later starred for Jacksonville State. He and Kristian led Lanett High to a 2A state title in 2017. The Panthers are in this year’s semifinals and will play Sweet Water High this Friday for the right to advance to the 1A state title game to be played at J0rdan-Hare Stadium in Auburn.

Bo and Kristian’s paths crossed two years ago in Tuscaloosa. Each won a state championship game on snow-covered Bryant-Denney Stadium.

In Saturday’s win over Samford, Nix set the Auburn freshman quarterback record for completions in a season. His current mark of 185 has eclipsed the previous mark of 180 set by Stan White in 1990. Nix also owns the freshman record for touchdown passes in a season with 14. White had the previous record with 13. Nix is also closing in on White’s freshman record for passing yardage. Nix now has 2,193 yards compared to 2,242 for White. With this coming Saturday’s Iron Bowl game against Alabama yet to be played and with the Tigers already bowl-eligible, that record is easily within reach.

Nix and Story will likely be going against one another in future Iron Bowl games. Story has committed to play for Nick Saban and Alabama, so it’s possible the top two passing record-holders in Alabama could faceoff on opposite sides of center in 2020 in one of the state’s biggest rivalries.