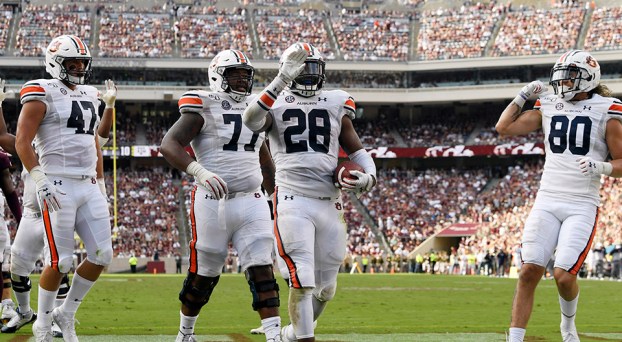 No. 12 Auburn gets ready to host No. 4 Georgia in SEC showdown

AUBURN — They remember the roars.

What Jordan-Hare Stadium sounded like two years ago when Auburn knocked off then No. 1 Georgia 40-17. Many were on the field in uniform, some were in the stands on recruiting visits.

Four years earlier, when Ricardo Louis reached the end zone after catching the Prayer in Jordan-Hare in 2013, a high school sophomore from Sugar Hill, Georgia captured the moment on his phone.

“That was my first ever visit,” said senior defensive lineman Derrick Brown. “I remember it like it was yesterday. I remember everything about that night, actually.”

Fellow senior Jeremiah Dinson, a Florida native, knows how much this rivalry means to his teammates from the Peach State.

“You have a different juice about you,” Dinson said, when you’re competing against the folks from home.

“I know how it can be,” Dinson said. “It’s Auburn family. I’m just calling out the family a little bit, just bring some juice, bring some energy, and I know they’ll bring it this week.”

Georgia has shut out two of its past three SEC opponents. Auburn has had an extra week to rest and prepare.

“We’re playing one of the more talented teams in the entire country, maybe the most talented,” Auburn coach Gus Malzahn said.

Auburn freshman quarterback Bo Nix, coming off a career-high 340 passing yards against Ole Miss, grew up attending Auburn-Georgia games and hearing his dad’s tales of battling the Bulldogs in 1994-95.

“The Auburn people and the Georgia people know exactly how important it is,” Malzahn said. “If you’ve got a quarterback who understands it, I think all it can be is a positive. I know he’s excited.”

“It’s a chance to show how good of an offense we are,” said receiver Seth Williams, who leads Auburn with 35 catches, 569 receiving yards and eight touchdowns. “It’s good to be back home. That’s a prime-time game for the SEC on CBS. Everybody’s going to be watching, so we’re going to show up and play hard.”

Both teams score around 33 points per game on average, but with two stingy defenses – Auburn ranks No. 13 nationally (17.4) while Georgia ranks No. 2 (10.1) – it could be a low-scoring afternoon on the Plains.

“We can’t really compare ourselves to any other defense,” Auburn linebacker K.J. Britt said. “We’ve got to control what we can control, our defense. Making sure that their offense can’t score, that’s the name of the game. If they can’t cross the goal line, then we’ve got a good chance of winning. I’ll be ready Saturday. I promise you that.

“Play Auburn football, play the brand of football that we’ve been playing all year long. Play with an edge. Play fast, play physical, and just tackle. If we can do those three things, we can put ourselves in a good predicament.”

Part of that fun is the energy the crowd provides. The home team is counting on it.

“We’ve still got the best fans in college football,” Britt said. “And everybody knows our fans are going to be there against Georgia. No question. We’re ready to play. I know our fans are ready to cheer.”

The LaFayette 5 and 6 year-olds won the championship this past Saturday 36-13 over Beaureagard. KD Heard three touchdowns, Jordan... read more