On to the next level 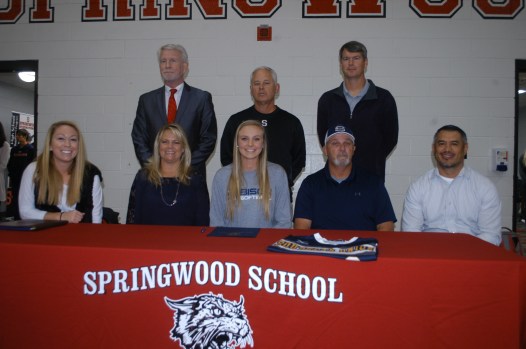 LANETT — Emma Jennings has been playing softball since she outgrew T-ball. Now, she has the opportunity to continue playing a sport she loves past high school and at the collegiate level.

On Friday morning, she signed a scholarship to play for Coach Ally Silva at Southern Union State Community College.

“I am really excited about this,” Emma said not long after the signing ceremony in the school’s fine arts center. “Southern Union has a great program, and I’m looking forward to playing for Coach Silva and pitching coach Taylor Turner.”

Emma is a truly outstanding right-handed pitcher and also plays second base.

Emma said she’d like to continue playing softball at a four-year school after finishing up at Southern Union.

“I am glad she is going to a school where she will have great teammates and great coaches,” he said. “She has great parents, and it has been a joy to watch her grow into such a good player. Her going to college is my trophy.”

“We are really proud of Emma,” said Springwood Head of School Dr. Lowrie McCown. “What we are seeing here today is a statement of performance over many years both here at Springwood and with travel ball. When you sign a scholarship to play sports in college, you are in elite company. Only around 3 percent of athletes who play in high school go on to play in college.”

Galen Smith, Emma’s coach at Springwood, said that she’s one of the best players he’s ever worked with.

“She has been playing so long,” he said. “She’s been playing softball for Springwood since she was in the sixth grade. It’s been a long process, she’s been committed to it, and she just keeps getting better and better. Emma has been a real pleasure to coach.”

Two of the proudest people at the signing ceremony were Emma’s parents, Jody and Kim Jennings. They flanked her as she signed the scholarship papers and couldn’t help but smile broadly through the ceremony.