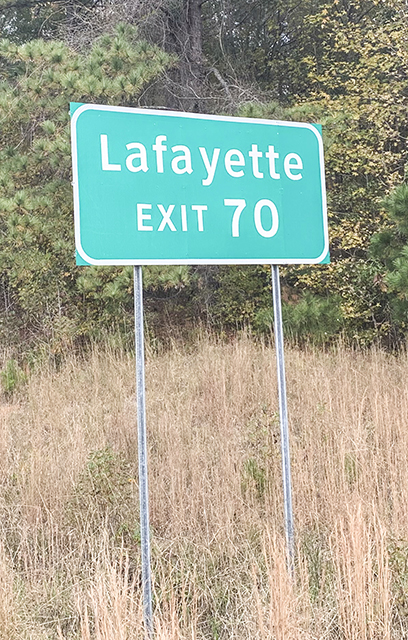 The sign on Interstate 85 heading north has the incorrect spelling of LaFayette. The LaFayette City Council has passed a resolution asking for the Alabama Department of Transportation to place new signs on the interstate with the correct spelling. — Dustin Duncan

OUR VIEW: Respecting the F in LaFayette

This past weekend we wrote about LaFayette City Councilwoman Charlotte Blasingame’s mission to have the city LaFayette’s name on highway signs displayed correctly.

While this isn’t a hard-hitting news story that may draw many eyes from anybody who doesn’t live in LaFayette, it is important for many of those residents on the western side of Chambers County.

LaFayette’s name has an interesting history to it and how the capital F evolved. According to the city’s website, the town was first called “Chambersville.” However, by the time of incorporation on Jan.7, 1835, the town name had been changed to “Lafayette,” named after the French military officer who fought in the America Revolution War Marquis de Lafayette.

Several towns in the South bear the name of the former aid to America during the war.

However, LaFayette got its current capital F from a person in the journalism industry.

The town changed the way the name was displayed by capitalizing the F due to the influence of newspaper editor Johnson J. Hooper, who created a fictional character called Captain Simon Suggs, a backwoods southerner who pronounced the town’s name as ‘La Fait.

The LaFayette City Council has already passed a resolution to have the name changed on the highway and interstate signs. That request has already been set up the chain of command at the Alabama Department of Transportation.

We support the changing of the name on the signs because those signs should reflect the correct name of the city.

It’s a point of pride for residents of LaFayette because it set them a part of the many other Lafayette’s in the South. The Lafayette in Georgia is named after the same man but has the little f, and it’s the same for a much bigger city in Louisiana.

But LaFayette, Alabama, is the only one we know of with a capital F in its name and has a different pronunciation. We think that is something special and unique to Chambers County, which should be proudly displayed to motorists driving on Interstate 85 and Highway 431.

If you like to shop — and probably even if you don’t — this is a week you’ve had circled... read more