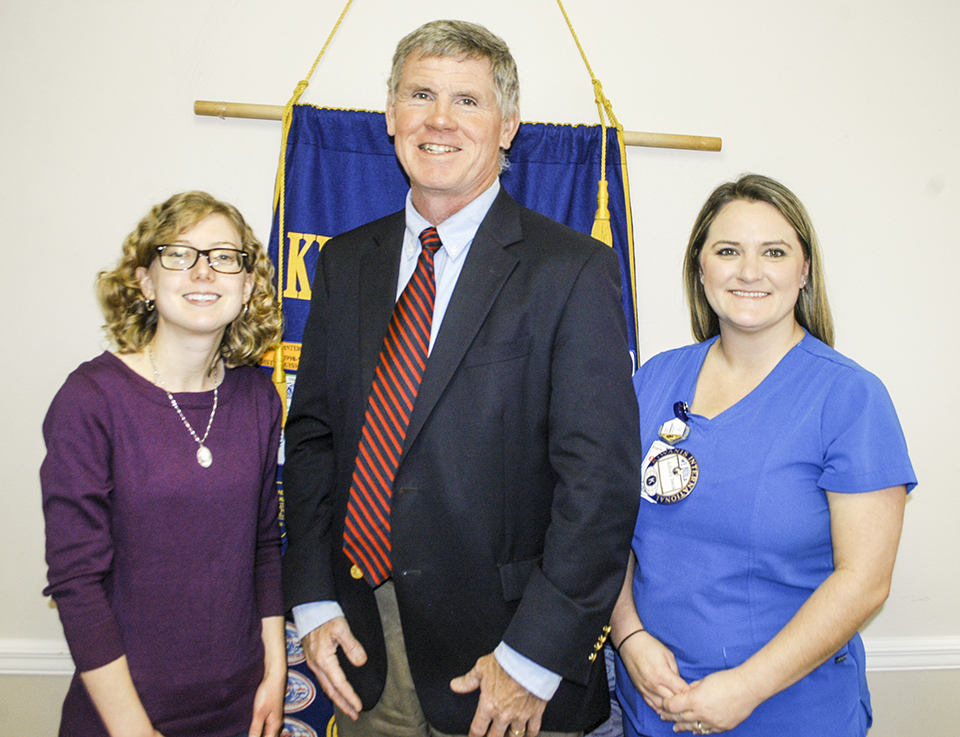 VALLEY — The guest speaker at Wednesday’s meeting of the Kiwanis Club of Valley talked about two of his leadership roles. Gordon Stone is both the executive director of the Higher Education Partnership since 1997 and is also mayor of Alabama’s youngest and fastest-growing city — Pike Road.

For the past year-and-a-half, Stone has spoken to many city officials, businesses and civic clubs around the state.

“It’s been a real pleasure to meet with people and get a flavor of the state,” Stone said. “I have been blessed to do this. We are how we were raised. Some people overcome desperate circumstances. I was fortunate to have had wonderful parents who taught me the blue of hard work and the value of getting a good education. I owe so much to my parents. It was never in doubt that I would go to college.”

In 1985, Stone earned a varsity letter on the Auburn football team the year Bo Jackson won the Heisman Trophy. He went on to earn a bachelor’s degree from Auburn and a master’s from Auburn University at Montgomery.

Stone grew up in the small Alabama town of Pineapple, where he and his friends played lots of sports and learned the importance of fair play.

By the mid-1990s, Stone saw a clear need for advocacy in behalf of the state’s four-year colleges.

“When it came to public policy, things weren’t changing as fast for the four-year schools as they were for public education in general,” he said. “Everyone assumed that the four-year schools were OK. Research that was underway at that time showed that the story of higher education needed to be told. If not, it could be lost. Every society that progresses has people who are thinkers, people who are gifted at planning for the future. We knew we had a story to tell about higher education. We knew there were voices out there that needed to be heard in a constructive way.”

Stone said that much progress had been made during his lifetime in the way of public education and that this needs to continue.

“There are children being born today under difficult circumstances who have a much greater chance of getting a good education today than did those children born under similar circumstances in the past,” he said.

Some personal tragedies opened Stone’s eyes to the impact of rapidly improving education. His first child was born prematurely and died within a few weeks. It was a very difficult thing for he, his wife and other family members to endure. He had a daughter born a few years later who also had to battle serious health problems.

“She survived,” he said. “Because of my experience, I have seen advancements in health care. There are so many things available today because of the comprehensive model of education we have in place.”

Stone said that there are amazing things going on at schools like the University of Alabama at Birmingham and in Huntsville, which without much fanfare is heading up the U.S. Mission to Mars.

“We are telling a story to give you something to think about,” Stone said. “We need to think of education in terms of pre-K through Ph.D.”

Stone said the city of Pike Road was created because a handful of people wanted to have a community school system. They were determined to see this dream through and willing to fight Montgomery County in court all the way through.

“We wanted each child in our community to be able to reach their full potential,” he said. “We went from door-to-door talking to people and getting them to sign a petition for incorporation.”

A vote on having a new city passed overwhelmingly.

“We had about 350 people when we first started,” Stone said. “Surrounding neighborhoods wanted to join with us. We have a number of annexations. Pike Road now has over 10,000 people.”

The city school system has had a way of uniting the community.

“At one time, there were 40 private schools dividing the community,” he said. “People who lived on the same street went to different schools, wore different sports uniforms and cheerleader outfits. Most of them now are in the Pike Road School System, where over 5,000 students are enrolled. This is not the end but the beginning. What’s important about this is that it shows what can be done in this state when people put their minds into it.”

Stone said there are some disturbing trends in college enrollment. It’s in decline, partly due to high school graduates not thinking that college degree isn’t all that important and partly due to the rising cost of a college education.

“You don’t have to have a college degree to be successful,” Stone said. “But there will always be a need for college-trained professionals — doctors, lawyers, bankers, teachers. You know what happened in this community with the textile industry. We need to make sure we diversify, and you have to have skilled people to make anything work.”

Stone said he was making stops around the state telling the story about the importance of higher education.

“I want to make young people think about what can happen to them if they have a four-year degree, and better yet a master’s,” he said. “I just hope we don’t get to the point where watered-down things keep us from opportunities we once had. There’s no reason for us not to be providing the same opportunities other states do.”