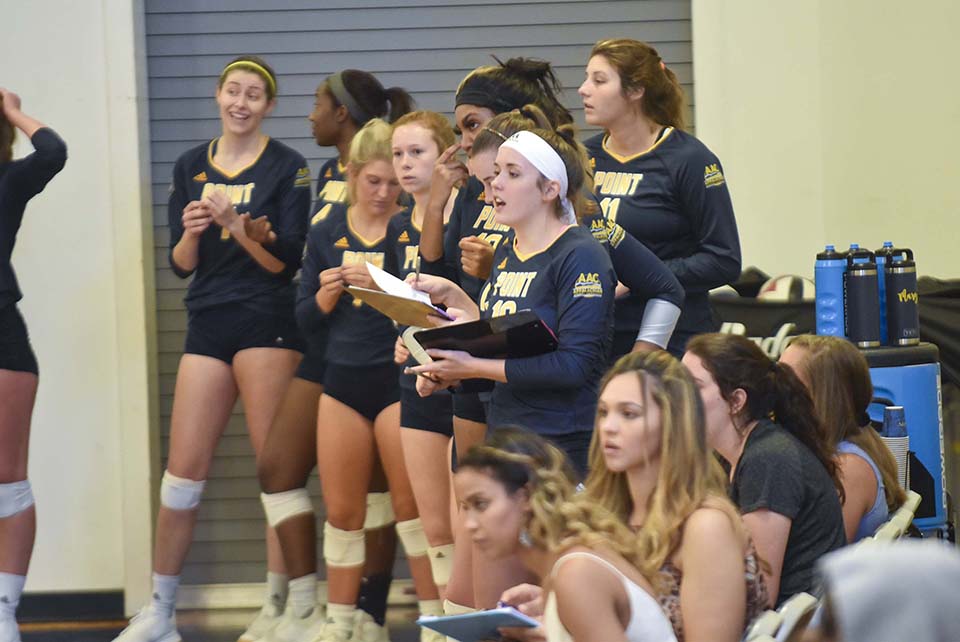 WEST POINT — Another season brought another year of milestones for the Point volleyball program. The Skyhawks (24-8, 19-2) finished second in the Appalachian Athletic Conference south division, which automatically qualified the team for this year’s national tournament. This is Point’s first year qualifying for nationals.

“I think it’s awesome that we achieved our goal because we’ve set this since the very beginning since preseason,” freshman libero Whitney Ward said. “Our goal was to go to nationals and I’m really excited to be a part of it.”

Point began the season 4-7 before finishing the year on a 20-1 run. The last two losses were to south division regular-season champions, Reinhardt. Sophomore outside hitter Rachael Ellis said the slow start was the new team under the direction of first-year head coach Joe Herrera trying to figure things out such as how to play together and rotations.

“In the beginning, [Herrera] said that you either lose or you learn,” senior outside hitter Faith Pearson said. “I think we’ve definitely learned and improved, and I’m so excited.”

The Skyhawks are scheduled to travel to Kingsport, Tennessee on Tuesday for this year’s conference tournament.

“The girls are very focused,” Herrera said. “Yes, nationals were a part of our goal, but we have yet to win a tournament championship so that’s another one of our goals. They’re focused, they’re ready to go and compete. It’s going to be a great tournament, all 10 teams, any of the 10 teams can win it, not just first or second, there are a lot of teams that can give you a great game so we have to stay focused. That’s what I keep trying to preach to them.”

Also in Kingsport, this week will the presentation of this year’s conference awards. Last season, Tatiana Dale won the conference player of the year, while Julia Felix made all-conference first team. Ellis made all-conference second team, the all-freshman team. Emma Boles was named to the Champions of Character Team and Alex Battles, Tessa Burns, Dale, Felix, Charlotte Havrisik, Autumn Hill, Hadley Perdue and Mary Rimmer all made the all-academic team.

This season, Herrera expects many Skyhawks to get recognized again.

“Absolutely,” he said. “These girls have broken some records this year in their careers, and they will definitely be recognized. Whether it’s all-conference team, setter of the year, I definitely expect those girls to be recognized within our association and conference.”

The awards banquet will be on Wednesday, the same day the No. 7 and No. 10 teams in the tournament will play each other. The Skyhawks will face the winner of that matchup on Thursday. The conference tournament continues through Saturday, and the team finds out its first opponent in the national tournament on Nov. 18.