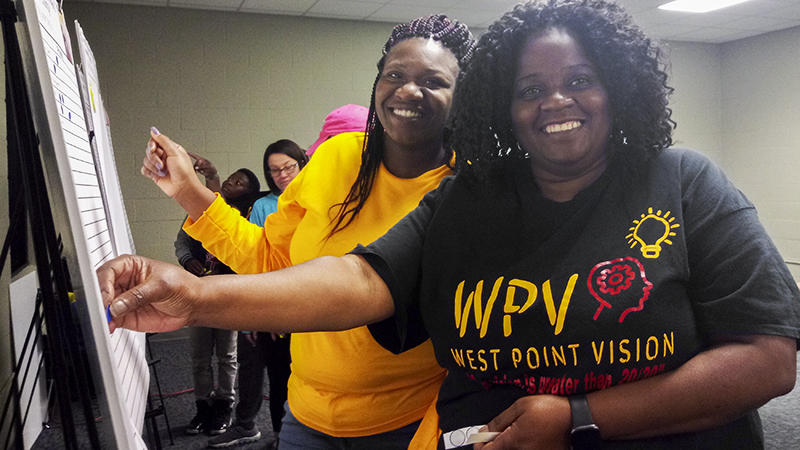 WEST POINT — Troup County Parks and Recreation Department held open meetings in West Point and Hogansville on Monday and Tuesday to get feedback on the future of the county’s parks system. A focus group was also held on Monday in LaGrange.

The county is working with Barge Design Solutions to research and plan the next ten years of park development. Barge Landscape Architect Steve Provost and Certified Planner Mary Vavra led three resident input meetings this week to hear what people want to see in their parks.

Provost said Barge has been working through a three-phase plan for Troup County. The first phase, research and analysis, is nearly complete. Barge has been gathering data about the parks and what they offer. Provost said Barge coordinated with other area studies that have already been done, like the one made in preparation for The Thread and comprehensive plans completed by the county and each city.

He said phase two is the current phase and involves outreach, including this week’s public meetings and surveys. From the input gathered from local people, the Barge team will produce a needs analysis, a guideline to what might be missing in current park offerings. They want residents to think big.

The third and final phase is recommendations. Provost said Barge will lay out a ten-year plan for operations, staffing and budgeting.

As part of the initial research phase, Barge took an inventory of all parks, and the programs offered in each space. They looked at people using the facilities, finding where population is the densest in comparison to where parks are located. They completed a financial analysis of the parks system as well. Provost said they found the current Troup County parks in varying degrees of repair.

“Some are new and in good condition. Some are old and worn out,” he said.

Provost said they ranked each park’s condition from excellent to poor. Then each was categorized by park type, acreage and facilities.

When breaking down Troup County’s population, Barge found the number of people in two age groups, 17 and under, and 35 to 54, were decreasing. However, people 55 and over were increasing. These numbers will affect how the parks department looks at needs for the next ten years.

In order to pay for a ten-year plan, the county has to finance not only the building of any needed facilities, but figure out how to pay for anticipated maintenance, equipment replacements and any upgrades that might be needed.

Participants could also voice specific concerns to Barge representatives or write those concerns on comment cards available. A map of the county was also provided so residents could point out where they thought facilities were needed.

For LaGrange, the most popular requests were ball fields (soccer and football) and basketball courts, as well as an event center.

The most popular program request in LaGrange was for nature programs, followed by life-skills classes, shooting sports, fitness programs and youth swim classes.

West Point residents overwhelmingly asked for a gym or sportsplex and a dog park.  Also popular were tennis courts, followed by a climbing facility and RV campground and natural surface walking trails.

The most popular program requests in West Point were tennis and pickleball lessons, as well as senior programs, special events, life skills classes and horseback-riding lessons.

Hogansville requests were not available as of this writing.

Next from Barge will be an online survey of LaGrange residents that will run from November through the first of the year.  Then a similar survey will be run for the county from mid-January to February.