Ramsay knocks Valley out of playoffs 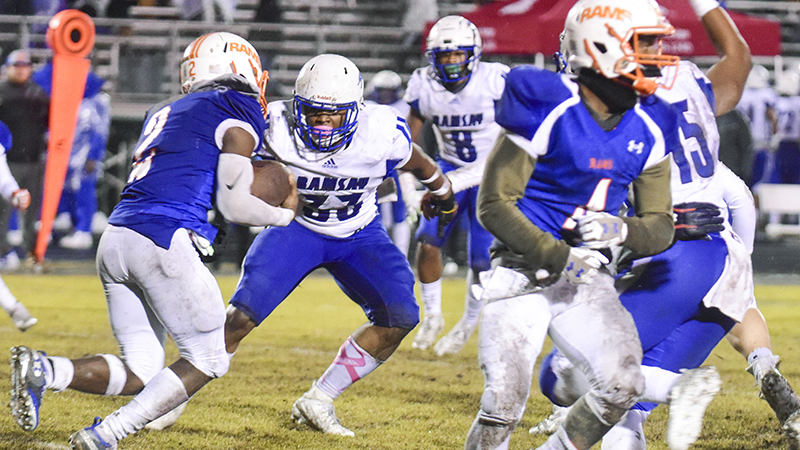 VALLEY — The Valley Rams saw their season come to end Friday night at home against the Ramsay Rams.

Ramsay started the scoring fast and often in the 41-7 victory over Valley at Ram Stadium.

Valley fumbled the football three times and one was run back for a touchdown by Ramsay senior linebacker Jalen Belcher with 7:53 in the second quarter putting Ramsay up 28-0.

“We didn’t play well and you do that against good football teams, the result is usually what we got tonight,” he said.

Ramsay started the scoring on its first drive marching the ball down the field on strong runs by junior running back Jeffrey Rowser. The drive was capped off with a 3-yard rush by Rowser, putting Ramsay up 7-0.

A quick three-and-out by Valley and a big pass play from Ramsay junior quarterback Kamren Ivory to junior wide receiver Jaylin Peterson inside the Valley 5-yard line. Rowser finished the drive with a 1-yard touchdown run.

Valley started to move the football with runs by sophomore running back Willie Baker and sophomore quarterback KD Hutchinson later in the first quarter.

Valley was also helped by two personal foul calls against Ramsay. However, Valley committed its own personal foul inside the Ramsay 5-yard line, resulting in the ejection of senior offensive lineman Judson Garner.

Valley turned the ball over on downs and didn’t come close to the end zone until late in the fourth quarter.

Daniel said the weather Friday night shouldn’t have been a factor since both teams were on the field, and it didn’t seem to both Ramsay.

“That’s a little bit of our youth,” he said. “We just have to grow up to play in this type of weather.”

Although Valley’s season is over, Daniel said he’s proud of his team and the outgoing seasons who have been with Daniel since he took over as head coach. However, with sophomores Baker and Hutchinson, there is still plenty of talent left at Valley for a bright future.

“We do have a young team, and we have to learn from our mistakes and go back to work,” he said.