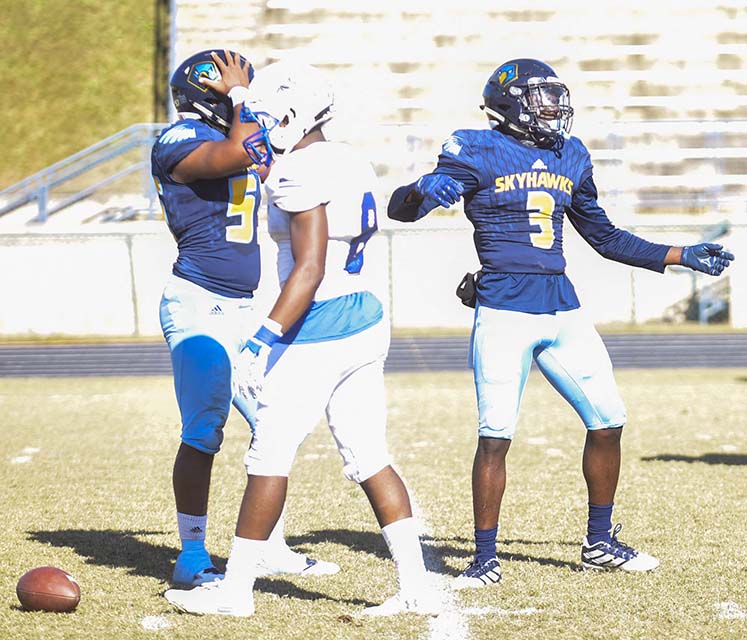 VALLEY — On an afternoon where the culture of Point University was celebrated, the Skyhawks lost their fourth-consecutive home game to St. Andrews 33-28 this past Saturday.

The game came down to the Skyhawks’ final offensive drive when Point sophomore quarterback Keenan Wise led the team into St. Andrews’ territory before being tripped in the backfield on fourth down with a minute remaining.

“My initial reaction is disappointment,” Point head football coach Julius Dixon said. “Heartbreaker, but in this game that we love to participate in, you can ask for nothing more but to determine your fate. We knew there at the end that we needed a stop to get the ball back. If you get the ball back, then you knew what you needed to do. That was in our hands and we didn’t make the plays that we needed to make to secure this victory.”

Point (4-6, 2-2) and St. Andrews (5-4, 5-1) were tied at 21 until early in the fourth quarter when St. Andrews junior wide receiver Kashard Cohens snagged a corner touchdown over Point junior defensive Isaiah McFarland. McFarland later made up for the grab by laying a hard hit on Cohens in the same quarter.

St. Andrews then scored again with 4:58 remaining to take a 33-21 lead as the Skyhawks’ chances seemingly slipped away.

However, Wise and the hurry-up offense that he has orchestrated multiple times for Point this season returned as the Skyhawks swiftly made it up the field. The momentum-shifting defining moment of the day came from Homecoming King MarQuez Jackson when the senior grabbed a deflected Wise pass from out of the air to keep the offense moving.

“Some things you just can’t teach,” Jackson said. “That was just straight effort, and effort takes you far in life. It kind of gave me goosebumps. I heard the crowd going wild, and all I can do is give the glory to God.”

The Skyhawks defense then stepped up and got a quick St. Andrews’ stop to give the offense one more chance to win the game.

“I think we played well on defense,” McFarland said. “There were just penalties and mental mistakes. We get that together then we win this game.”

Point’s home record dropped to 0-4, while the team remains 4-2 on the road. Saturday also marked the Skyhawks’ first loss to an unranked opponent this season.

“I can’t tell you, to be honest with you,” Point junior defensive lineman Gary Davis said of the team’s home drought. “We’re just not finishing at the end of the game.”

McFarland said that the environment might affect the team’s intensity on a week-to-week basis.

The Skyhawks have one more home game on Nov. 16 against Bluefield College for senior day before wrapping up the season at Furman on Nov. 23.