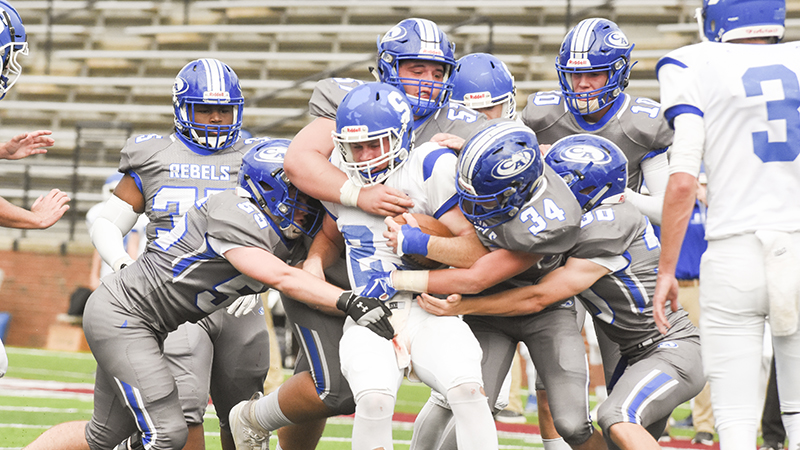 Chambers Academy’s week five rematch against Southern Academy was the complete opposite result for the Rebels, as they lost 14-8 in Friday’s Alabama Independent School Association class A State Championship in Troy.

Chambers took a brief 8-0 lead on a Payton Allen touchdown run, but Southern scored the final 14 points to win the title.

“Our kids fought hard, can’t blame them,” Chambers coach Jason Allen said. “I just did a terrible job as the offensive coordinator and head coach. We hadn’t scored that few of points in five years.”

Chambers defeated Southern 42-21 in week five, but the Rebels couldn’t get their offense going on Friday.

On Friday, the Rebels finished with 299 yards, 237 of which were on the ground.

Braxton carried the ball 25 for 93 yards in the loss. Payton Allen finished with 123 rushing yards and 62 passing yards. He carried the lone touchdown across the goal line for the Rebels and converted the two-point conversion.

In his last game, Caydon Smoot finished with four catches for 59 yards and a one-handed interception that ended a Southern drive at the end of the first half.

“He [Smoot] played his heart out… I’m really going to miss him,” Jason said.  “He loves to win. He hates to lose more than anybody and you saw that out there today.”

The first half ended without either team scoring a point (these teams combined for more than 900 points this season).

The Rebels came out fast in the second half, marching 80 yards in 10 plays. Three of the nine runs on the drive were longer than 10 yards, one of which was Payton Allen’s 13-yard touchdown score.

The success of the drive was the option. Whichever Allen carried the ball, he ran up the middle.

The Rebels continued their tear early into the second half, until the drive stalled out around midfield.

The ensuing punt changed everything for Chambers.

The ball left Payton’s foot and took one bounce before Foster Hinton fielded the ball at his own five. He split a pair of tacklers and took off 95 yards, scoring Southern’s first touchdown.

It converted the two-point conversion as Hayden Campbell shook off a would-be tackler, tying the game.

With 36 seconds left in the third quarter, the Cougars had mounted only 102 yards on offense.

Special teams played a big role the at the end of the next Rebels drive, as the drive ended with a shanked one-yard punt.

The Cougars scored seven plays later, mainly set up by a 31-yard run by Logan Kynard.

A quarterback sneak scored the game winning touchdown with 5:05 left in the game.

Chambers had a chance to win the game, driving all the way to the Southern 45-yard line, before a fumble ended the Rebels’ chance at a come from behind win.

With the loss, the Rebels fall to 1-4 in the last five state championships.

“What these kids have done the last five years has been nothing short of amazing… I wouldn’t trade them for anybody” Jason Allen said.