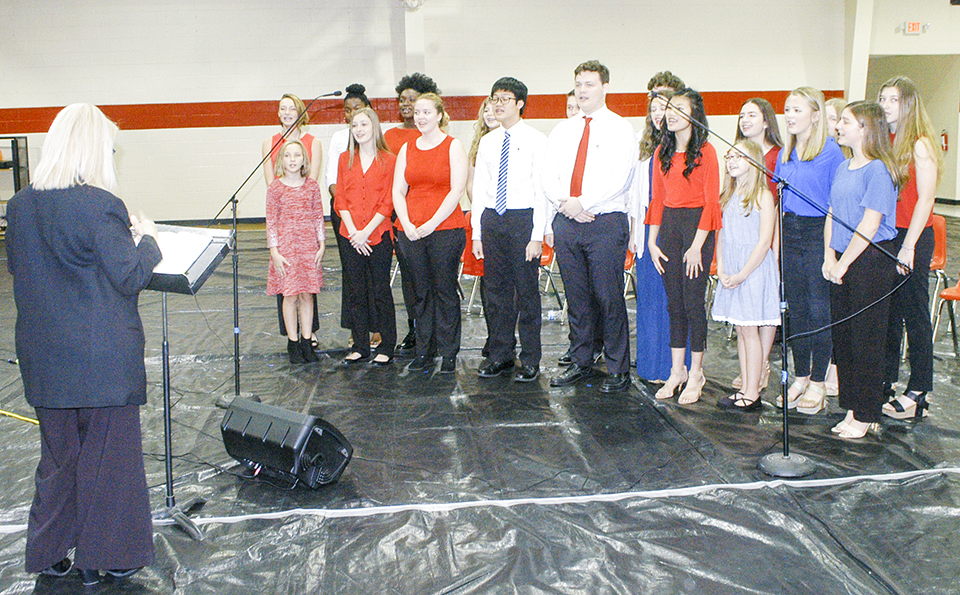 LANETT — Close to two dozen local veterans were honored guests as Springwood School celebrated Veterans Day 2019 with an impressive program in the Larry Boswell Gym. The school band and chorus performed patriotic songs, each veteran present was introduced, Headmaster Dr. Lawrie McCown talked about what veterans mean to our country and Springwood teacher Murphy Wood discussed the role soldiers played in making our country what it is.

“We have a country with freedom like no other country in the world,” McCown said. “It’s because of our active duty military personnel and our veterans.”

In tribute to each branch of military service and the men and women who have served in that branch, the Springwood chorus sang “The Army Goes Rolling Along,” “Anchors Aweigh,” “The Coast Guard Hymn,” “Off We Go Into the Wild Blue Yonder” and “The Marine Corps Hymn.”

Wood said the government that began with the U.S. Constitution of 1787 was an experiment. No one knew whether it would work or not.

“Rulers and armies had always kept people under control,” he said. “This time it would be the Constitution, and if it failed the country would fail. There’s a story of Benjamin Franklin being approached on the street by a woman who asked, “What kind of government have you given us?’ He replied, ‘A republic, if you can keep it.’”

Wood showed a clip from the 1941 movie “Sergeant York” making a case for American ideals. Sgt. Alvin C. York, portrayed by Gary Cooper, was torn between his religious belief that it was wrong to kill and his duty to country. The officers who trained him knew that he would be a good soldier because of his amazing marksmanship ability and wanted him to be part of the American Expeditionary Force going to Europe in 1917. Mayor Buxton, his sympathetic commanding officer, gave him a book about American history and asked him to go home, read it and think about what it means to be an American. He does that and then reports back to duty telling his superiors that he wants to serve, despite not having it all figured out, but having enough faith to leave it in God’s hands.

Wood then read the names of famous battles in U.S. history. “

We should all know these names,” he said. “Many young men made sacrifices on these battlefields. They died twice, once on the battlefield and again in not being able to grow old and have a family.”

Wood read the names of famous battles from the Revolutionary War, the War of 1812, the Mexican War, the Civil War, the Spanish-American War, World War I, World War II, the Korean War, the Vietnam War, September 11, 2001 and the wars in Afghanistan and Iraq.

After showing a film clip of the natural beauty of the land and Ray Charles singing “America the Beautiful,” Wood said we can appreciate this because of the sacrifices made by our soldiers.

“They gave us something more beautiful than our land — freedom of speech, freedom of assembly, freedom to worship and freedom from fear — knowing you won’t experience military violence. When we enjoy what we have in this great country, let’s not forget that it was purchased at a really steep price.”

He said our soldiers bear burdens every day few people think about.

“Do you know that we have lost 32 soldiers this year in Afghanistan?” Wood said. “While we are enjoying our freedoms in this beautiful land, how much do we think about this? We have become complacent about the cost of being free.”

Wood said that George Washington could have been a king if he wanted to, but he wanted his country to be a democracy.

“Washington admired a Roman leader named Cincinnatus, who was a farmer who left his home to lead Rome through a difficult period. When things were back to normal, he turned down an opportunity to be emperor and went back to his farm. After the Revolution, there was an incident known as the Newburgh Conspiracy, when some soldiers plotted for Washington to be America’s king. He met with then and told them thanks but no thanks. He had prepared a written statement denying that opportunity. As he pulled out his eyeglasses to read it with trembling hands, everyone in the room knew that he had given everything for his country and that there was no way they’d try to talk him out of it.”

After the adoption of the Constitution, Washington did serve two terms as president and like Cincinnatus went back home to his farm.

A U.S. Army veteran, Wood said he’s concerned about the Army drawing its personnel from smaller and smaller portions of the country, and the poorest regions of the U.S. making up the largest percentage of soldiers.

“Students growing up in the big metro areas are less likely to have a teacher or coach who served in the military,” he said. “We might be more interested in what was happening in the military if we had more skin in the game.”

This is very different from what took place in World War II, when 16 million served.

“On the home front, people lived with rationing and didn’t complain about it,” he said. “Today, Hollywood is the center of protest against American military action. In World War II, everyone was involved, and some of the leading actors of the day served in the military. All hunting ammo was suspended for the duration of the war, and people didn’t complain about it. We were united to win the war.”

Wood talked about how Arlington Cemetery got started. Grave No. 1 is that of John Megis, the young son of Montgomery Megis, quartermaster general of the Union army. The younger Megis graduated from West Point in 1963, volunteered for service and defied his father by serving dangerous missions. He got killed on one of them in the Shenandoah Valley. His grieving father decided to show some contempt for Confederate General Robert E. Lee by turning the grounds surrounding his Arlington, Virginia home into a cemetery for Union soldiers who had fallen in the Civil War. Today, Arlington is the most hallowed ground in the country. It’s the final resting place for thousands of soldiers and American icons such as President John F. Kennedy, Senator Robert Kennedy and Chambers County’s Joe Louis Barrow.

Wood showed a film clip of a recent ceremony at Arlington in which a young man from Mississippi was laid to rest. It was a solemn but impressive ceremony with a flagged-draped coffin, a 21-gun salute and culminating with taps.