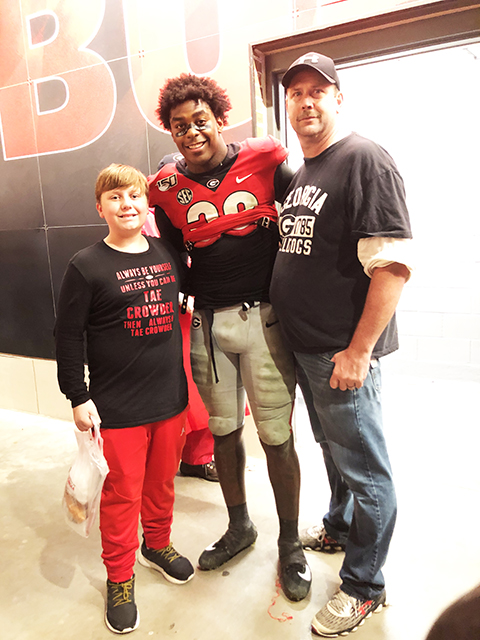 Addison Turner and his step dad randy Holland pose for a photo with Tae Crowder at his senior game against Texas A&M this past Saturday. — Submitted

Springwood School eighth grader Addison Turner has relied on a special connection with a Georgia linebacker as he battles a health condition caused by a bad heart valve.

University of Georgia linebacker Tae Crowder, a Harris County native, reached out to Turner after hearing he was being bullied due to his condition. Crowder heard about Turner from his mother, Felicia, who is a family friend of the Turners.

“My step-dad, Randy [Holland], works with his mom and came home with a pair of gloves from him that were used from a game,” Turner said.

The connection has inspired Turner, who has dealt with a heart condition his entire life.

“It wasn’t a permanent fix,” Holland said. “He has a bad heart valve, and they will have to replace that at some point … but he is not allowed to do a lot of sports. He can’t do any type of weight lifting or anything like that.”

Holland said the relationship was formed quickly between the Turner and the Georgia star.

“I’ve always had a heart for kids like that,” Crowder said. “Addison keeps me going because I know what it’s like to be down and knowing that he loves looking up to me and knowing that I have people that love to see me shine is something special. I’ve always wanted the best for him because he’s a special kid with a big heart just like me.”

Turner is now allowed to play on the Springwood School basketball team, in spurts, when the doctor allows game time, but it was not always that way.

“At that time, Tae didn’t play often except on special teams,” Holland said. “Addison began sending Bible scriptures and encouragement to Tae. In return, Tae also encourages Addison via text. When Addison went through some very tough times, Tae was always right there keeping him up and going. When Addison has struggled with his health and trying to get better in basketball, it’s Tae’s encouraging words that keep him going.”

When Crowder was younger, he had a younger brother who was killed, and said he has used his story to inspire others.

“The reason this is important is because if you read anything about Tae you will see the similarities of these two,” Holland said. “Tae has a mission and a reason to keep going. Addison knows he may only have this season. He never knows when it is time to stop getting to be active. He will have more surgeries.”

Turner said that having someone important reach out has always felt special.

“It was amazing, and it was like God sent an angel to pick me up, dust me off and gave me strength,” Turner said. “Why do I think he should make it to the NFL? Because Tae has proven that he will work harder and harder to get better, he gives his all, and the NFL needs someone like Tae.”

Turner said that they both share the connection of loving Philippians 4:13, and that Crowder inspires him every day. The verse says “I can do all things through Christ who strengthens me.”

“I work in healthcare and I know what happens to people with Addison’s condition as they grow, but I also know the great physician, God,” Holland said. “Addison will tell you that because of God he is able to do what he does and because of God Tae is a starting linebacker with Georgia. It is true … Addison’s isn’t supposed to be able to play basketball and by all accounts Tae shouldn’t be where he is but when God is involved, the impossible is always impossible. Hence, the connection that Tae and Addison both share in Philippians 4:13.”

While Lanett was setting records and cruising to its twelfth win on the season Friday night, the Sweet Water Bulldogs... read more