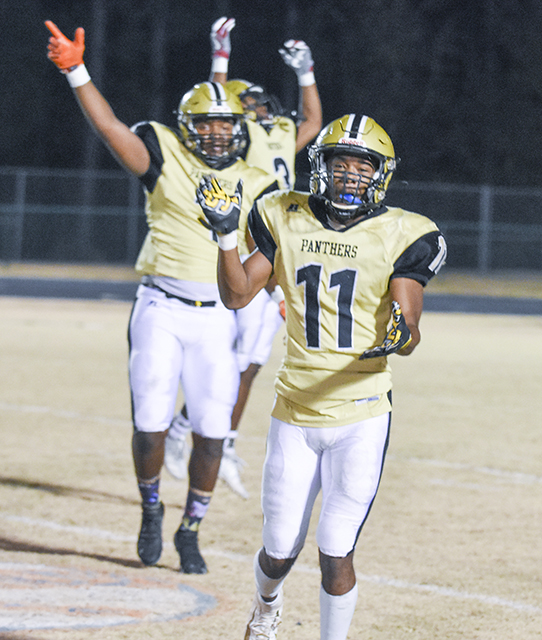 Lanett wide receiver Ka’Darius Zackery claps his hands in celebration during the Panthers victory over Isabella on Friday night. The Panthers will play at Sweet Water on Friday at 8 p.m. ET.

While Lanett was setting records and cruising to its twelfth win on the season Friday night, the Sweet Water Bulldogs hand their hands full in a tight game.

With 5:50 left in the game, Sweet Water trailed Brantley by a touchdown. A three-minute, eight-second drive tied the game, and the Bulldogs kicked the game winning field goal near the end of regulation.

Both teams are at the top of the 1A rankings, as Sweet Water is No. 2 while Lanett is No. 3.

Friday’s matchup will be the first time the two schools have matched up.

Even though this is their first meeting, both schools have shared history in the past two years. It starts in 2017 in Tuscaloosa, as both teams competed and won a state championship. Lanett defeated Leroy in the 2A championship, while Sweet Water claimed its 10th championship against Pickens County.

Lanett moved down to 1A at the start of 2018. In the first round of the playoffs that year, Sweet Water lost to Maplesville. Two rounds later Maplesville defeated Lanett.

The final similarity came in the Alabama-Mississippi All-Star game. Both Story and Sweet Water coach Pat Thompson were on the coaching staff for the game.

The game led into a friendship between the two coaches, who text throughout the season.

“At the end of the night, we’re going to shake hands, pat each other on the back and wish each other well,” Story said.

The two coaches had a chance to see each other on Saturday at a coaches meeting. Story said they talked pretty extensively but not about the game.

Thompson has his team rolling after finishing 6-5 in 2018. The Bulldogs are 11-1, with the only loss coming on the road against 3A Pike County. They average 42 points a game, while allowing just 15.8. They have four shut outs this year, winning by a combined score of 203-0.

The Bulldogs run the wing-T offense, meaning they put the quarterback under center and have a running back directly behind him with a second back to next to him. Defensively, Story said they are a “sound tackling team” and “fly around to the ball,” meaning yards after contact might be an area of focus on Friday night.

“It’s going to be up to us to stop them,” Story said. “They’re just going to play good sound football.”

Even though Sweet Water is small town (population of 237 in 2017), it is one of the toughest places to play a football game. Since Thompson took over in 2014, the Bulldogs have protected their home field, going 31-6 in that span.

“They have people behind them,” Story said. “They all say you have to [get up big] on them because most times you get up on a team and they will quit. [Sweet Water] will not quit.”

For most people, Thanksgiving is the time to relax, watch football and recuperate until Christmas. Lanett head coach Clifford Story... read more