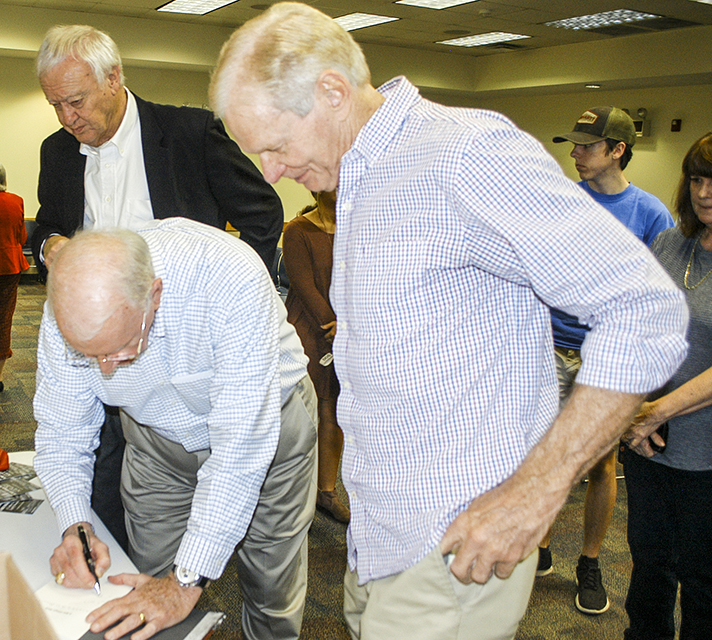 In introducing him, CVHS President Malinda Powers said that Andrews was something of a trailblazer.

“What’s so good about this book is that no one else has written anything like it,” she said. “It has so many great stories. There are men and women in this Valley with great stories to tell. We should write them down. We need to preserve these memories. We don’t want them to be gone forever.”

Andrews said living in the South comes with a different way of life.

“Everything we do with the South is complicated, even our vernacular, our speech,” he said. “It’s different. When we were living in Kennebunkport, Maine, my wife Claire was a substitute school teacher. Her southern accent was so different to the students they thought she was speaking a foreign language.”

In the heyday of the West Point companies, there was no better place to live than a mill village, Andrews said.

“I was born at the end of the Great Depression in a two-room house on Combs Street in Fairfax,” he said. “Dr. (Crew) Hunt made a house call to deliver me. My grandmother ran one of two boarding houses in Fairfax.”

Typically, six young men lived there at any point in time.

“For the most part they were country boys who had gotten jobs in the mill and needed a place to stay,” Andrews said. “This went on for decades. My grandmother prepared 125 meals a day. Mill workers would come by to eat lunch. Valley High didn’t have a cafeteria at the time, and students would come by to eat. “

Andrews grew up a short distance away from Highway 29. This was long before I-85, and U.S. 29 was a very busy road.

“It was the main corridor from the Northeast to the Gulf Coast,” Andrews said. “There must have been at least five people hitchhiking through here every day. Word got out that my grandmother would give them a hot meal, and they enjoyed stopping there.”

Andrews’ dad was a weaver in Fairfax Mill for a time.

“He wanted to start his own business,” he said. “He started a Kaiser-Frazier dealership and did really well for a time. He had 31 employees and 150 new cars. Kaiser-Frazier went out of business and he lost everything — his business, his home and all the investments he’d made. At the time, I wanted to go to Auburn and be an architect. He lost all the money he’d been setting aside for me to go to college. At 16, I went to work in the mill. After high school graduation, I commuted to Auburn and paid my way through school.”

Andrews was in a co-op program, which allowed him not only to work through school but also to learn many lessons in the workplace.

Andrews had 16 different jobs in the mill and learned a lot at each one.

“Learning by doing was the key for me,” he said. “Altogether, I worked 39 years for West Point Manufacturing Company, WestPoint Pepperell and WestPoint Stevens.”

Toward the tail end of his career with the West Point companies, he worked three years for Bill Farley.

“He sent me to New York City. I worked there for one year before going to work for Johnston Industries.”

He was president and CEO for Johnston for five years at a time the company won numerous awards in textile manufacturing. He later worked for a company in Troy, Alabama, that made fertilizer from seaweed and then had the opportunity to do something very rewarding. He became a visiting professor at his alma mater, Auburn University.

At one point in his career, Andrews had held 35 different management positions throughout a 40-year period. There was one question people were always asking him: “Why don’t you write a book?”

He’s done that now and is busy writing a second one. In writing “A Mill Village Story,” Andrews said his inspiration was to leave something for his children, grandchildren and the people of the Valley.

“Another reason was that I wanted to see if I could write a good book,” he said.

He’s done that with “A Mill Village Story,” which has 33 chapters and 309 pages.

His second book will be entitled “The Problem Doctor.” It’s a nickname he earned while being assigned many different management positions.

Andrews said things had been great for him over most of his time with the West Point companies. Things started to turn sour following Bill Farley’s hostile takeover of the company in 1989.

“The real problem with textiles began with free trade in the 1980s. That’s what killed it. The hostile takeover accelerated what was going to happen anyway,” he said.

In a chapter entitled “Alabama,” Andrews writes of seeing robed Klansmen having a torchlight march through downtown West Point in the late 1940s. He and his family went out of simple curiosity.

“I can remember the words of my father: ‘In America, everyone has freedom of speech — even if it is repulsive and against our personal principles.”

There’s a chapter devoted to the A&WP Railroad and its importance to the local area. At one point in the 19th century, cotton was the leading export from the U.S. and half of it leaving the country went through the port of Mobile. The A&WP was a main transport line getting cotton to that port.

To those who have wondered about the width of railroad tracks or a highway, Andrews has an answer.

“They are actually based on the width of a mule or horse’s behind,” he said. “The modern highway is based on the width of two horses’ behinds working in tandem to pull a wagon or an Egyptian or Roman chariot. Then automobiles, trains and trucks were designed to fit the roads and rails that existed.”

Gerald and Claire spent 12 years in the historic Griggs House. On April 16, 1865, a Civil War battle swirled around that house. Fort Tyler was located in the house’s backyard. The fort commander, General John Tyler, is thought to have been fatally wounded by a Union sniper firing from the back of the Griggs House.

“The back concrete wall facing the fort still shows the pockmarks and devastation of the day-long battle,” Andrews writes. “Even the rocks and railroad spike marks were left in the wall, noting when the Confederates eventually ran out of ammunition and finally surrendered.”

One of the more interesting chapters in the book is on the famed Heard County, Georgia psychic Mayhayley Lancaster and Andrews going to see her.

“There was always a stream of automobiles and trucks lined up to see Mayhayley, looking for answers,” Andrews writes. “People just appeared at random, unannounced, that she had never seen before.”

Most people had to stand in line for an hour or so to see her. Mayhayley was uncanny in the way she could tell people where to find items they’d lost and to predict their future.

Andrews was nine years old the first time he saw her. Mayhayley was in her mid-70s.

“She was skinny, leathery looking and with a patch over one eye,” Andrews writes. “She kept looking at me with her good eye, a very uncomfortable feeling on a cold night in the near dark.”

Andrews remembers her wearing a heavy-wool Army overcoat and some kind of military cap. Andrews had accompanied his aunt.

“She told my aunt that she was pregnant, and my aunt confidently smiled, and I heard her respond ‘No way, absolutely not.’ Going home she mentioned it in the car, laughing about it with my uncle. Eight months and three weeks from that very evening, my cousin was born.”

Mayhayley later told Andrews’ grandfather where he could find a missing harrow and who had stolen it from him. The man she described proved to be the one who had stolen it. Legend has it that Mayhayley once told famed actress Tallulah Bankhead where to find her missing diamond ring.

“She was never married or had children of her own,” Andrews wrote of Mayhayley. “If I were a betting man, I would wager that if she had a do-over she would not ask the second time around for this special ‘gift.’ It was not a life she chose, but a life she was given.”

In a chapter entitled “My Town” Andrew writes of what’s been lost with the passage of the mill village.

“Every little village, for decades, had its own movie theater,” reads the text. “It cost a total of 25 cents to go to the all-day picture show and buy a bag of popcorn and a Coke. Today, if you were to attend a movie at the multiplex, you would have to take out a loan at the local bank, especially if you took your girlfriend. The small town theaters are now all gone. Every community had a recreation department for most company-employee activities, along with youth and sports teams from five-years old and up to 70 and even older. There were always lists of scheduled functions every week — dominoes, cards, bingo, civic clubs, church get togethers, school functions, library visits, sporting contests and community presentations. Everyone enjoyed participating in something. The company maintained all the homes, corporate property, provided a free kindergarten, paid your own health insurance and helped to financially support hospitals, plant/community nurses, public education, churches and sports programs through elementary, junior high and high school.”