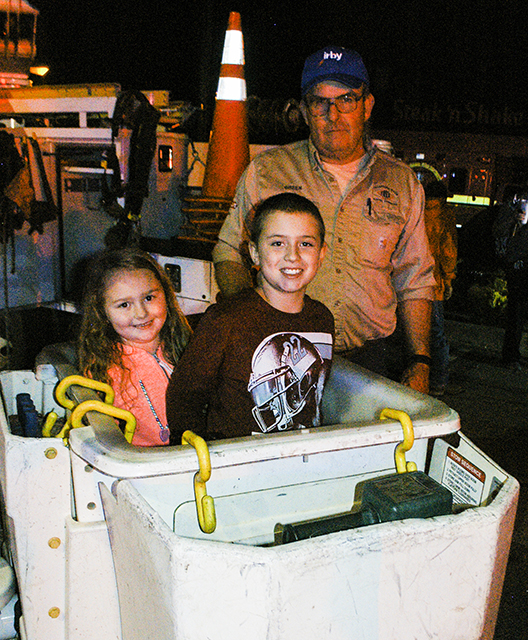 VALLEY – In celebration of Veterans Day, Zaxby’s in Valley hosted a Touch a Truck event Monday evening, giving local families a chance to see, touch and sit in big trucks used every day by first responders.

Children had the thrill of sitting behind the wheel of an East Alabama Fire Department fire truck and standing in the bucket of a Tallapoosa River Electric Department (TREC) line truck. Everyone marveled at the capabilities of a Valley Police Department cruiser, East Alabama ambulance and especially with “Stevie Ray,” a Tesla X fully-electric sustainable car.

At the event, Anna Cullen, director of external relations and communications, and Stewart Massey talked about what the Tesla X can do.

“This is the future of transportation,” Cullen said. “We charge it with solar energy at the West Point Visitor Center to drive it on The Ray, the 18-mile stretch of I-85 that runs from the state line to exit 18 in LaGrange.”

The Ray is named for West Point native Ray C. Anderson, founder of Interface and pioneer for corporate sustainability. Following his death in 2011, the Georgia legislature named the portion of interstate from his hometown and the original headquarters of Interface in his honor. Kids enjoyed getting in the TREC bucket Monday night at Zaxby’s. Lineman Roger Green was there to help them with it. They didn’t get taken up in the air but did get a feel for what the linemen do each working day.

Headquartered in LaFayette, the Tallapoosa River Electric Cooperative extends over eight counties, going all the way from Mount Cheaha to the north to Lake Eufaula to the south. There are more than 4,000 miles of line to cover. The company has satellite offices in Mellow Valley and at Fort Mitchell.