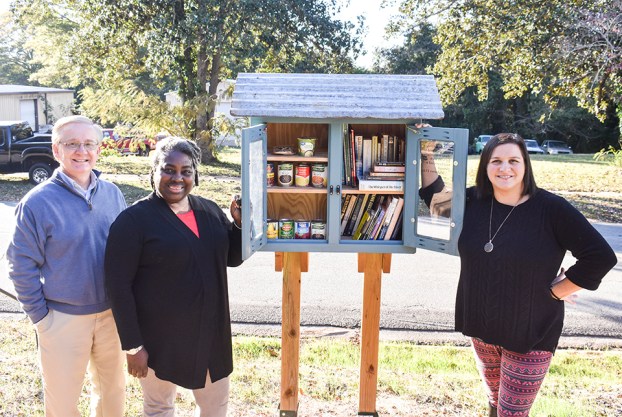 Amanda James, right, stands next to her Little Free Pantry outside of her West Point Home on Avenue E. To the left stands West Point Councilman Gerald Ledbetter and West Point Vision member Princess Tucker. The group would like to raise funds to build several more pantries throughout the city, such as churches and outside of the West Point Housing Authority. — Photo by Dustin Duncan

WEST POINT — Amanda James set up a Little Free Pantry outside of her yard in February, and now she wants to help build more pantries throughout the city.

James said community members approached her about how to get more pantries built, so she put together a team with West Point Councilman Gerald Ledbetter, Kesha Edwards-Coniglio and representatives from West Point Vision to start a GoFundMe page.

The page is asking for $2,000 to build as many pantries as possible. James said if the group hits its goal of $2,000, it can likely build about four or five structures.

The pantry outside of the James’ home on Avenue E resembles a small, light blue house with a tin roof bolted onto two-by-fours in the ground. The pantry has food on one side, books for all ages on the other as well as toiletries. The structure was built by Ron McClellan at Ron’s Wood Studio.

James said the goal is to put about three or four pantries at libraries and another at the bus stop by the West Point Housing Authority.

“It’s full of kids getting on and off the bus,” she said. “Some of those kids don’t know what they are going home to or if there will be anything to eat.”

She said the plan is to stock the eventual pantry by the housing authority with snacks and TV dinners. The group would need to get permission from the West Point City Council to place the library there because it’s on city-owned property.

Ledbetter has taken the lead in setting up a pantry outside of the West Point Presbyterian Church, where he is the pastor.

He said the structure is paid for, and McClellan is working on it now.

“That is the grassroots of any community,” he said. “That is what these free pantries are all about.”

Ledbetter said his pantry would only contain food.

“I’m not here all the time and people stop by the church all the time seeking help,” he said. “That will give an opportunity for people to take what they need and leave what they can.”

James had to get permission from the city to construct her pantry because it was on city property. Ledbetter said the council was excited about being involved with the project.

“We were inspired by Amanda when she came and asked for permission to put one in front of her own home,” he said. “That was really the catalyst for this whole thing.”

James said her pantry has been successful. She said people walk by to thank them for having it and to put items in it.

“It has really brought the neighborhood together,” she said. “The fear is somebody is going to come by and take everything out of it, but it hasn’t happened. It has been treated really well. It looks the same as when we put it up.”

To donate to the GoFundMe page, visit https://www.gofundme.com/f/little-free-pantry-project?utm_source=customer&utm_medium=copy_link&utm_campaign=p_cp%20share-sheet&fbclid=IwAR15cyD3mqOeAX86ynWsdVwisL71ZeVKFbbJZCQIEKTAlHd95L2k1VqPOtg