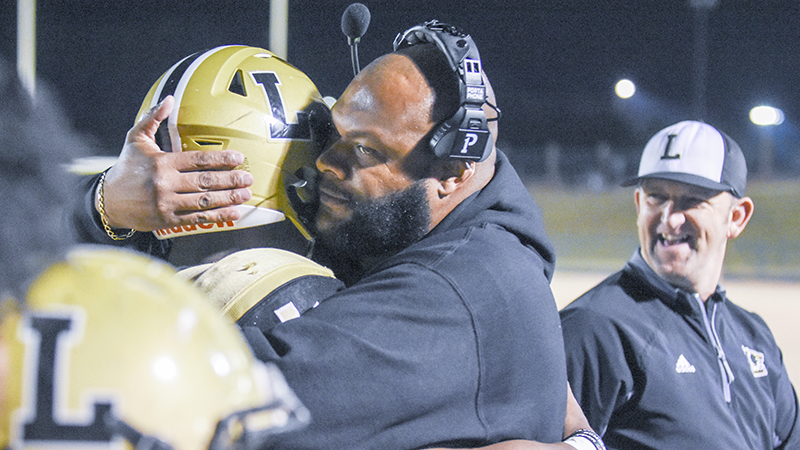 Lanett quarterback Kristian Story gets a hug from his dad and coach, Clifford Story, after breaking the all-time record for career touchdowns. Below, Story is shown throwing the pass that broke the record. --Daniel Evans

Story passed Auburn starting quarterback Bo Nix for two records — the most career touchdowns and the most career offensive yards — and the Panthers rolled past Isabella 41-21 in the class 1A quarterfinals.

It took just two passes for Story to tie the touchdown record, a 21-yard strike to Ka’Darius Zackery and a 31-yard touchdown to Jaquarius Houston. The senior set the record just four passes later when he hit Larontavious Hurston for a 49-yard touchdown.

“It was on my mind, so I was just trying not to force it and let it come to me,” Story said. “When it came to me, I just kind of relaxed and played my game.”

The yards record took a little longer, but at the 11:20 mark of the fourth quarter, Story broke Nix’s mark with a 10-yard scamper.

“It means the world to me, because of all the work I have put in,” Story said. “To see it come to pass and to do it with my teammates.”

Overall, he finished with six touchdowns (four passing and two on the ground), 301 passing yards and 33 rushing yards. He also intercepted a pass and returned it 59 yards to set up one of his two rushing touchdowns.

Story was chased to his right, and while falling away, he lifted a pass 40 yards downfield. The ball went through an Isabella defender’s arms, landing in Langston’s grasp, while he was over his defender.

“Those work really hard in practice. They compete like no other. They don’t want to come off the field,” Lanett coach Clifford Story said. “Those are the types of guys you need on your team.”

Lanett’s last touchdown came on a highlight level play by Story. He rolled to his left looking downfield, spun out of a sack, broke a pair of tackles, juked a defender and jogged into the end zone.

“I guess I was kind of in the zone. It felt kind of good to do it,” Kristian said.

Of his two highlight level plays, Kristian said his favorite was the pass because Langston made a great play.

Isabella kept the game close until the end of the third quarter. After the two-play drive to start the game, the Mustangs went 64 yards in three plays, taking a 7-6 lead.

Lanett travels to Sweet Water for the semifinals next Friday.