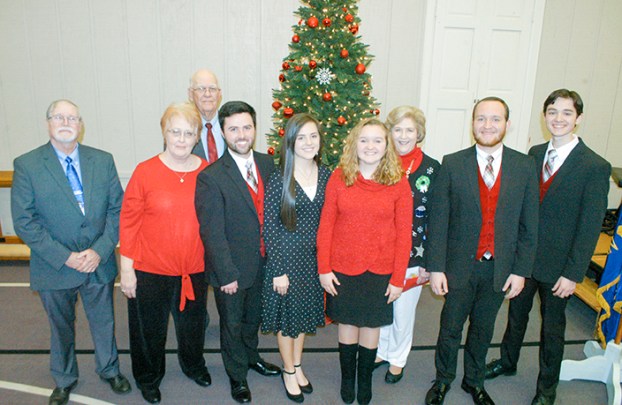 A local gospel singing group, “The Exhorters,” performed a mixture of Christmas and gospel music at Thursday’s annual American Legion dinner at Langdale Methodist Church. Shown above are Sammy and Mary Sue Newton, brother and sister Carter and Morgan White and sister and brothers Laura Haney, Wyatt Haney and Jacob Haney. In back are Post Commander Lanny and Karen Bledsoe. — Photo by Wayne Clark

VALLEY — American Legion Post 67 has been an advocate for local veterans for a long time and has done good work helping local veterans in getting the benefits they earned from their time served in the military.

For this to continue, though, the torch must be passed from the current leadership to younger veterans.

A large gathering was present for the event, which took place inside the family life center at Langdale Methodist Church.

“We will continue doing everything we can to help our local veterans,” Bledsoe said, “but we need to have younger veterans involved. We need to keep this post going and continue the good work it has done for a long time.”

Most of the current members who are active in the post are in their late seventies and older. A past post commander, Roy Hill, recently passed away.

“We appreciate what he did for our post. He was a good leader,” Bledsoe said.

“The post adjutant is one of the most important positions we have,” Bledsoe said. “There’s a lot of paperwork to do and staying in touch with members. Bobby was always good at that, and we are fortunate that his successor, Sammy Newton, is doing a really good job, too.”

Bledsoe thanked long-time members Mack Lett and Frank Harltey for what they’ve done. Lett has gotten fellow members of the Chambers County Education Retirees Association (CCERA) to donate times for care packages that have been sent to U.S. Marines, and Hartley drove the DAV van to Tuskegee, making it possible for aging veterans who live in the local area to make their medical appointments at the VA Hospital.

Bledsoe recognized Vietnam veteran Sam Cofield for the work he does in working through Vet to Vet to counsel veterans who are struggling with issues related to their war service.

“We have two men here tonight who are dear to our heart,” Bledsoe said. “John Lyons and Bernard Paschal are World War II veterans, members of our Greatest Generation.”

Bledsoe said that Paschal had told him a very funny story from the time he was undergoing training in the Army Air Corps.

“He was in South Carolina at the time, and the navigator on his plane kept getting them lost,” Bledsoe said. “To find their way back home, the plane would drop low when they saw a water tank on the ground. They’d know where they were when they could see the name of the town painted on the side. I couldn’t help but laugh when Bernard told me he dreaded the possibility of him being the navigator on a plane going to Hawaii. ‘There wouldn’t be any water tanks we could find, and we’d probably run out of gas and crash in the ocean,’ he’d tell me.”

Bledsoe said he always liked to talk to veterans who grew up in the Valley and were in service during the Christmas season.

“I’ve heard a lot of stories of young men being away from home and missing the family at Christmas time,” he said. “I was fortunate one year when I was in the Marines. I got to go back home for 18 days in December. All I wanted to do was to eat and go duck hunting. The problem was when I got back to Quantico in January I was out of shape. The first day back our captain ran us for two or three miles, and it liked to have killed me. That’s one Christmas I will never forget.”

Bledsoe said he gets frustrated with some situations that come up with local veterans.

“We have some veterans in our community who have medical needs, but don’t have adequate paperwork to get it,” he said. “I don’t see how this is possible. They served our country. The least the government can do is help them when they need it.”

Two days out of the year when Legion Post 67 shines is on Memorial Day and Veterans Day. They host ceremonies at Veterans Park to honor our country’s war dead and veterans who have served in all our nation’s wars. They also host an event in the summer months called “A Day for the Veteran.” Its sole purpose is to arrange meetings between local veterans and representatives of the VA. It gives them a better understanding of the benefits they have earned because of their service.

“I thank all of you for being here tonight and for being active in our post,” he said. “We do want to get our younger veterans involved, so this chapter can remain active in helping local veterans with their needs.”