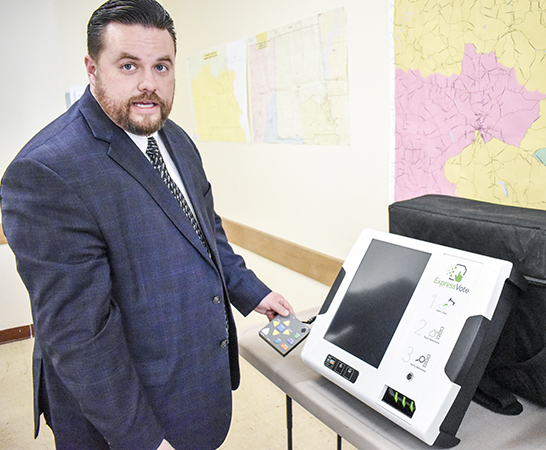 LaFAYETTE — Chambers County is home to a new set of voting machines.

Chambers County Probate Judge Paul Story said new voting machines have a better user interface and can count ballots faster. However, most voters won’t notice the change in how they vote unless they have a hearing and visual impairment.

For those voters, Chambers County purchased 20 machines called Express Vote, which will allow voters to view their ballot on a screen and adjust how big they want to see it. For those without the ability to see, the machine can read the ballot out loud or use braille to allow those voters to fill out their ballot on their own.

The machine will stamp the voter’s paper ballot and allow it to be counted with everybody else.

“It is just a better process,” Story said. “It gives them the freedom to do it themselves, which means a lot.”

Story said there would be one of the Express Vote machines at every precinct.

Even with the new machines, all the ballots in Alabama are conducted on paper and then counted by the device. Story said Alabama will most likely always vote on a paper ballot.

“If everything is digital with all the supposed hacking that occurs, … it is harder to back up anything because you don’t have anything substantial other than the data that’s processed,” Story said.

Another need for new machines was the fact the old machines were considered old technology. The former machines called M100s, were about a decade old, prompting Story to say, in technology terms, the machines were obsolete.

However, if the county were to purchase the machines outright, they would cost about $145,000 for 26 machines. He said with the jail expansion and several road and bridge construction projects in the county, that would be a tough purchase to make.

Story said he was able to lease the machines, making them free upfront. He said the county has a deal to where it will pay for the machines by the election.

This year, the county estimates it will pay about $9,000 for the Democratic and Republican primaries, run-off elections and general election.

The Express Vote machines were purchased outright by the county.

Story said he brokered a deal with the manufacturer to trade in several of the county’s former machines for credit and bought 20 of those machines for about $70,000.