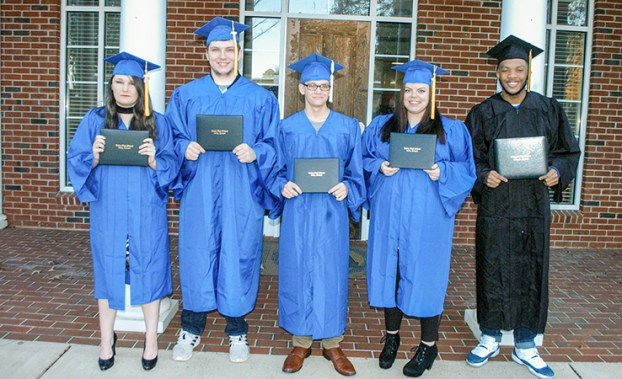 “This is the most students we have had in a mid-year ceremony,” Superintendent Dr. Kelli Hodge said. “We really enjoy doing this. It gives some much-deserved recognition to these students.”

The ceremony took place inside the board meeting room during Wednesday afternoon’s monthly meeting of the Chambers County Board of Education.

With a large gathering of family members and friends jammed inside the room to witness it, the five students were dressed in caps and gowns and entered the room to the recorded sounds of the traditional graduation march “Pomp and Circumstance.”

Each student had a challenging climb to reach that lofty goal of graduation.

“Each one has a different story to tell,” VHS counselor Tolandra Harris told the board. “Samuel overcame a lot to get here today. We are very proud of him. We had to push him a little bit to make it, and we are very glad he did. He’s one of our Career Tech students.”

“He was very determined to earn that high school diploma,” he said. “It wasn’t easy, but he did it.”

“Today, she fought the fight,” she said. “(VHS Principal) Dr. (Sherri) Ashe wouldn’t let her give up. She had to work a full-time job while working her way through our virtual school.”

Ashe said Valley High is proud of all its graduates for getting through high school.

“Jordan was a hard one,” Harris said. “We had to fight to get him through, but he made it. He held two jobs while finishing school. He’s such a hard worker, and we are so proud of him.”

“She had some things to overcome, but she did it,” Harris said. “She has a beautiful voice and works at the First Baptist Church of Shawmut.”

“We are so proud of him for staying with it and earning his way here today,” she said.

Hodge reminded the students that each of them still has their whole life ahead of them.

“It will help you to have that diploma,” she said. “I hope each one of you shoots for the stars.”

Board Member Jeffery Finch told the graduates he was pleased that each one of the students came through difficult circumstances but finished a commitment to graduate.

“If any of you need a job, come see me (at Leehan USA) and I will put you to work,” he said. “You are the kind of people we are looking for — people who fulfill commitments.”

In other business on Wednesday, the board breezed through a light agenda.

Hodge said she was considering having an early payroll in January. It’s a longstanding policy of the board to pay personnel before Christmas rather than at the end of December. The way the calendar works out this year, it will be six weeks between paychecks without an early payroll.

“We may pay out in mid-January,” she said.

Hodge congratulated Jennifer Boyd on having been sworn in as Lanett’s new superintendent.

“We will be working on a calendar with Lanett at the first of the year,” she said.

Special Education Director Fran Groover presented a new special education plan to the board. The only change from the previous one is that she’s the new director, having succeeded Diane Sherriff, who has retired from the system.

She offered a brief synopsis of the parts that didn’t change, such as the commitment to follow state requirements and spelling out how federal funds are spent.

Hodge said teachers would report Jan. 6 following the Christmas/New Year’s break and that students would be back the next day.

LaFayette head football coach James Lucas submitted his resignation, which the Chambers County Board of Education accepted on Thursday. The... read more