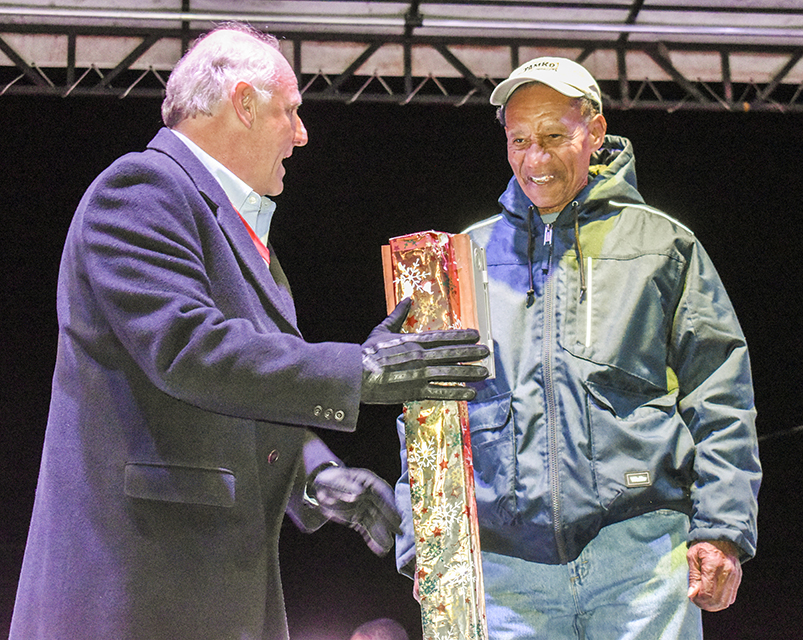 LANETT — Holiday cheer was in full swing Monday night at W.O. Lance Elementary School as the city of Lanett flipped the switch to light its Christmas Tree at Veterans Memorial Park.

Cecil Ramsey was named the 2019 Christmas Tree Lighting Honoree. He was given the honor of flipping the switch illuminating the hundreds of bulbs on a giant tree. Just behind it Santa Claus was asking children about their holiday wishes and taking photos.

Ramsey didn’t have much to say after flipping the switch except to express his appreciation for Mayor Kyle McCoy and the work he has done in Lanett.

“You are getting the job done,” Ramsey said. “I hope you stay as mayor for the next 20 years.”

“Tonight, I am so honored to talk about an individual who has done and still does do much for our city,” she said about Ramsey. “This man gives his time, his money, his energy to help others in time of need.”

Roberts said Ramsey is always willing to help with any situation.

“We love him at the Fuller Center and what he does for the Fuller Center,” she said. “He is amazing, and he is always ready to do whatever whenever. You would think by now he would be growing tired but he still has so much energy and so much love to give to our city.”

“Not only for the Fuller Center, and for so many people in this community, he has always been there regardless,” he said about Ramsey. “He has always given his time and his talents.”

Also in attendance Monday night was Kimberly Carter, who works for the Chambers County Development Authority and has authored a children’s book about Chambers County.

It’s called “Looking for Santa in Chambers County.” The book tells the story of Carter’s youngest daughter, Adalyn, 2, experiencing Chambers County holiday traditions such as the Lanett tree lighting and the Valley Merry-Go-Round while searching for Santa Claus around the county.

Carter read a few pages of her book and also signed copies for all children in attendance. Local singer Hannah Thrower performed a couple of holiday songs, and the Lanett High School band also played holiday music throughout the ceremony.