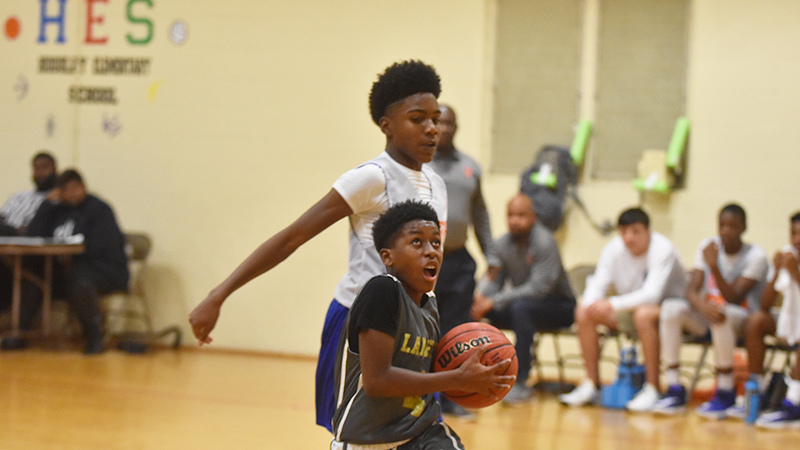 Cam’Ron Dooley finished with a game-high 22 points in Valley junior-high boys win against rival Lanett. Fifteen of his points came from beyond the arc.--Cody Estremera

Rivalry games always mean more than any other game, and that was true on Monday night when the Valley junior-high boys team dismantled Lanett 57-37.

“From the time you start playing for Valley, you have to understand the importance of this game,” Valley head coach Ronnie Hall said. “I told them we can’t take them lightly. We just need to do what we need to do.”

Throughout the first quarter, the Rams relied on eighth graders Ian Crim-Davis and Cam’Ron Dooley for their offense. The pair scored all 15 points, with Dooley nailing a couple of threes.

“When you have that gift like those guys, you just give them the green light and let them play,” Hall said. “I try to make sure they get quality shots, but when [Dooley] was on fire like he was tonight, you’ve just got to let him shoot.”

Coming out of the halftime break, the Rams had a 13-point lead, but Hall wanted more. He switched his defense from the full-court trap to man-to-man. The switch paid off, as the Panthers only made one field goal the entire quarter.

“We knew they didn’t have any guard play,” Hall said. “It helped us out a lot. We got turnover after turnover. We ended up going up 20 something by the end of the third quarter.”

One of the areas the Rams had an advantage was overall size.

“For this age group, that is key,” Hall said. “We have three guys standing 5-foot-10, 5-foot-11. You have to take advantage of that. That was one thing we worked on in practice, just getting the ball into the high post and the low post with our height.”

Lanett head coach Justin Gagnon tried to combat that disadvantage by putting three players inside the lane to force Valley to hit shots from the outside. The plan backfired when Dooley hit five threes in the game.

“We were trying to make them shoot us out of the game, and they just hit a lot of jump shots,” Gagnon said. “They just made them.”

When the Rams weren’t drilling shots from midrange or the outside, they crashed the boards, scoring on second or even third chance opportunities.
Dooley finished with a game-high 22 points. He made at least one in the first three quarters before sitting out most of the fourth because of the lead. Crim-Davis added 10, while three other players each had six.