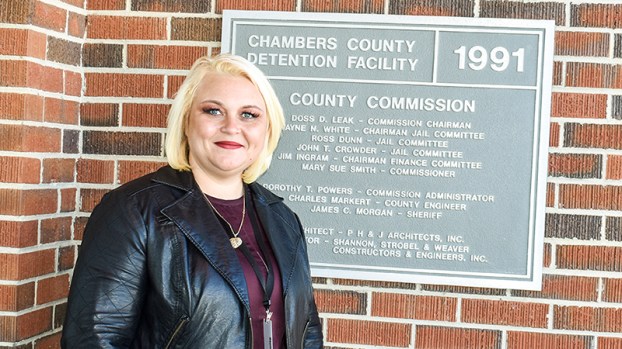 LaFAYETTE — Jessica Driggers wants to make a difference in people’s lives, and she’ll have the opportunity to do just that as the case manager for Chambers County’s “Stepping Up” program.

The program is called the Stepping Up Initiative to Reduce the Number of People with Mental Illnesses in Jails but is shortened to Stepping Up.

The county received $60,000 earlier this year in state funds to work with East Alabama Mental Health to send a caseworker into the jail.

The case manager, which is now Driggers, will examine incoming inmates struggling with mental health.

The program asks the court system to take a look at everyone booked into the county jail and ask them assessment questions.

If needed, the case manager will further examine the inmate to see if they need additional services.

Driggers, who is originally from Tampa, Florida, moved to Tallapoosa County while in middle school, went to college at Jacksonville State University, and then moved back to Florida, where she worked closely with the Florida Department of Corrections.

She worked for Pride Enterprises, and her job was to provide certification testing for inmates so they would have better chances of finding employment upon their release.

With the Stepping Up program in Chambers County, Driggers will be a link between inmates who need mental health services and those appropriate services.

Once an inmate is booked at the Chambers County Detention Center, she will screen each person who comes through the doors.

The screening will consist of a questionnaire that will determine whether or not those inmates need further services.

“I will be able to tell the nurse if this person has this going on, they may need to be referred to additional services,” Driggers said.

Moreover, she will help facilitate those additional services before the inmate is released.

Technically, Driggers works for East Alabama Mental Health, but she will work in an office in the county jail.

“The thing that excites me the most is that I get to be the face of something that is going to make some changes in Chambers County hopefully,” she said.

Driggers said that although she has only lived in the county for a short time, her parents and several friends have lived in Chambers County for many years.

The end game for Driggers is that she wants to make a difference and help people.

“My approach to life and work has always been to make it better when I leave,” she said. “If I can make a difference in any of these people’s lives, that’s really the bottom line for me. That’s really what I want to do.”

Also, as part of the two-year grant, a team will collect and review numbers to assess needs while identifying individuals entering the jail system with mental illnesses and their recidivism risk.

The team will use that information to guide decision making with the jail system.

The county will also be tasked with examining treatment options and determining what programs and services are available to those in the county with mental illnesses while identifying barriers to getting such treatment.

“I am excited to get in there and start collecting data, and see how many patients we have that fit into that program,” she said.