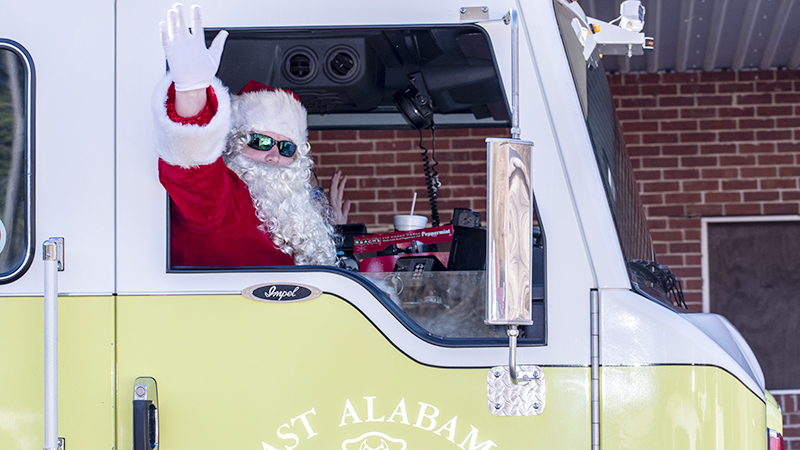 Santa Claus waves to local children on a ride through town on Christmas Eve. --Dustin Duncan

VALLEY — Santa Claus was in Valley, Lanett and West Point on Christmas Eve before hitting the rest of the world Tuesday night.

Kris Kringle was riding shotgun at about 1 p.m. in a yellow East Alabama Fire Department truck Tuesday afternoon starting in the Fairfax community. Parents and children were sitting in the back of pickup trucks to wave and greet Santa before his big night at the Givorns Foods Parking lot.

The East Alabama Fire Department, Lanett Fire and EMS and the West Point Fire Department collaborated on the holiday event, which has been a longstanding tradition in the Greater Valley Area. This year, the departments decided to work together.

“We felt that is the best way to let the communities be involved and all be on the same page,” Pickard said.

East Alabama was the first escort, weaving its way to the Valley communities until the interstate dividing Valley and Lanett. Then, Santa was expected to hop in a Lanett fire truck to continue his journey throughout Lanett.

Lanett Fire Chief Johnny Allen said the tradition goes back at least the 12 years that he’s been with the fire department.

“We try to make it fun for kids and adults,” Allen said. “We have just as many adults come out as we do kids.”

To complete his journey Tuesday night, Santa then hopped from Lanett fire truck to the West Point Fire Department emergency vehicle for a trip throughout West Point communities to finish the night.