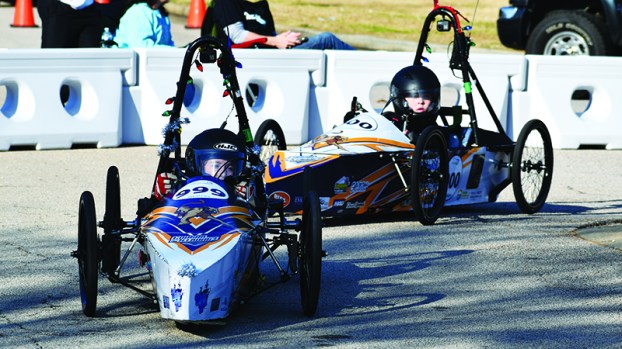 Earlier this year, a Greenpower USA race was held in Georgia for the first time, and the event that was contested at LaGrange College was a massive success, with dozens of middle-school and high-school teams from across the Southeast participating.

Last weekend, Georgia hosted a Greenpower USA event for the second time, and once again it was held in Troup County.

This time the host location was Long Cane Middle School, with teams representing a number of different middle schools giving it their best shot on the quarter-mile track.

“It’s the second Georgia race ever, and the first one here at the school,” said Matthew Graham, who directs the Cougar Strong race teams at Long Cane. “It was middle-school only with 13 teams, and for a first-time event it was great.

“There were four different heats during the Santa Sprints, and during one of the breaks the teams were even judged on their Christmas decorations Long Cane’s #000 team was the big winner, taking first place in the F24 intermediate modified division. The team was first in presentation, race score, and lap completion bonus, and it also won the overall title. Long Cane’s #999 team finished second in each of the individual categories and was second overall. “The last race at Grissom, we placed fourth and fifth, and they hated it,” Graham said. “They wanted to really work hard, and the presentation was excellent. We have really been grinding hard the last two or three weeks, and over the Thanksgiving break really, so that was good to see.”

“We had a lot of teachers here at the school come out and stay until late, and we had a lot more teachers come out (on Saturday),” Graham said. “The parents organized the hospitality room for the coaches, and you don’t always see that at races, so that was nice.”

Graham was also grateful to all of the teams that made the trip to Troup County.

“We wanted to say thank you to the teams that traveled from a long way,” Graham said. “They came from Chattanooga, Gulf Shores, several teams from Huntsville, and Chambers County, so I’m very proud.”

WEST POINT — Rain did not hold back the Valleywide Christmas Parade Thursday night. Light showers continued off and on... read more