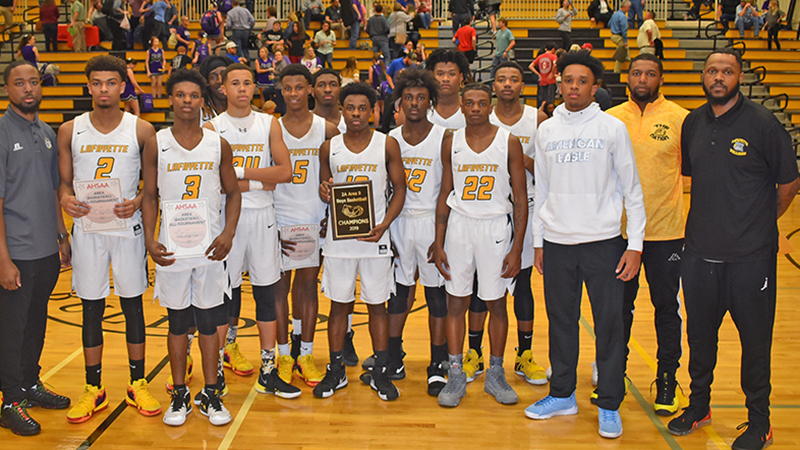 Even though it was one of the last eight teams standing last year, that isn’t the goal for coach Obadiah Threadgill and his group of Bulldogs.

“We have goals as a team, and we need to try to strive to hit those,” Threadgill said. “If we do our best and don’t get there, then we can live with not winning as long as we don’t leave any rocks unturned.”

Threadgill’s team is more dangerous than in previous years because of the experience it brings back. Of the 14 players on the roster, 11 are seniors and two are juniors.

Seniors Corey Boston and Matavaos Burton are the team’s one-two punch on offense, while Jordan Wallace and Markevious Moore are also players to watch.

Those four guys have been on varsity since they were freshmen.

“They have tons of experience and a lot of talent,” Threadgill said. “Those four guys set the tone for the program, not just this team, but the entire program. They are the most consistent.”

Those four have played a part in all three of LaFayette’s tournament runs, finishing with a 60-19 record in three years.

All of them realize they only have one more shot at winning the championship they’ve fought for the last three years.

“They’ve always been really close,” Threadgill said. “And I think that’s another thing that drives them. They’ve been really good for years. They have gotten the individual honors yet, but they have not gotten the ultimate team goal of a championship.”

The work to complete that goal started during the summer. Those four went in the gym and combined for about 25,000 more shots than anyone else on the team.

“That’s the type of work ethic that these kids have,” Threadgill said. “They all have individual dreams and individual goals … They do a really good job of working together and holding each other accountable.”

The senior quartet has been playing together since they were kids.

The Bulldogs are coming off a 28-5 record last year, and so far, the team looks poised to finish the regular season the same way.

Three games into the year, LaFayette is 3-0. All three wins were blowouts, as the closest game was an 18 point victory against 3A Dadeville.

Now, the Bulldogs turn their attention to 6A Opelika. They have won the last four meetings, including a 59-52 win in the last meeting in January.

“I’m expecting for Opelika to play extremely hard because nobody wants to lose to a school smaller than them,” Threadgill said.  “It’s always an electric environment and the crowd is so hostile. We need that.”