LaFayette boys use first-quarter barrage to blow out Ranburne 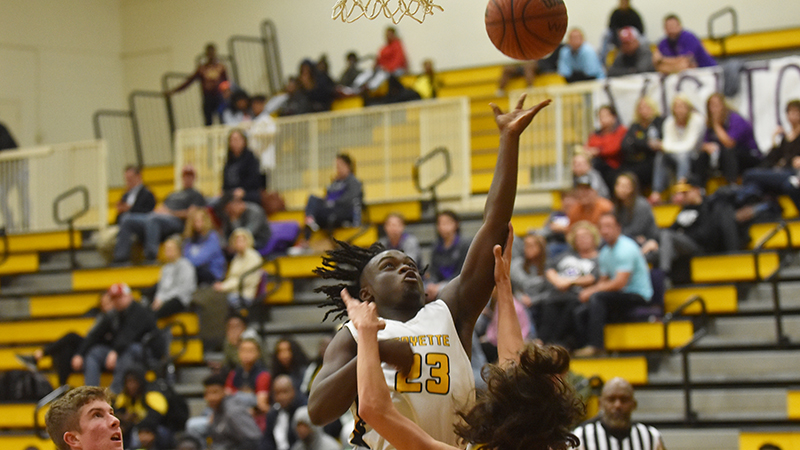 In a recent 56-41 win against Harris County, LaFayette boys varsity coach Obadiah Threadgill was disappointed in his team’s effort early. Top-ranked LaFayette responded with a 73-38 obliteration of Ranburne on Friday night.

“We wanted to challenge our kids tonight, to bring that intensity early and to move the ball and when they move the ball, they shoot the ball well,” Threadgill said.

The rout started immediately as LaFayette started the game on a 16-0 run. By the end of the quarter, the lead had grown to 23.

“The pressure had gotten to Ranburne a little bit,” Threadgill said. “We tried to play tempo and force them to play faster than they wanted to play. That’s why it got out of control so fast … Most teams don’t want a track meet.”

With LaFayette’s large lead, Threadgill was able to sit most of his starting five the rest of the game. Only two starters played in the second quarter, playing about two and a half minutes. The other three starters didn’t see the floor again until midway through the third quarter.

LaFayette won the tip and scored on its first possession of the game. This allowed it to set up its full-court press, which gave Ranburne problems the entire game.

Threadgill’s group was constantly getting to the rim early in the game, scoring most of its 29 first-quarter points in the paint.

In the second quarter, LaFayette played most of the quarter with its bench. It was also able to force turnovers and get to the rim with ease.

The few times it had to set up in the half-court offense, LaFayette threw the ball down low to sophomore center Antavious Woody, who stands 6-foot-3 and weighs more than 250 pounds. Woody scored in the paint with ease.

LaFayette’s breakneck pace slowed to start the second half, but it was still able to force Ranburne into turnovers.

“If you don’t have a ball-handler or your ball handler isn’t in shape, it’s going to turn into a track meet. That’s what these guys want,” Threadgill said.

Ranburne surpassed LaFayette’s first-quarter total with 7:31 left in the game. By that point, LaFayette had 66 points.

“If we play our style of basketball, then we think a lot of our games will be out of reach by the start of the fourth quarter,” Threadgill said. “There’s not a lot of teams on our schedule that can play with us, so we kind of have to challenge ourselves, and set our standard… If we do that, we expect a lot more wins like this.”