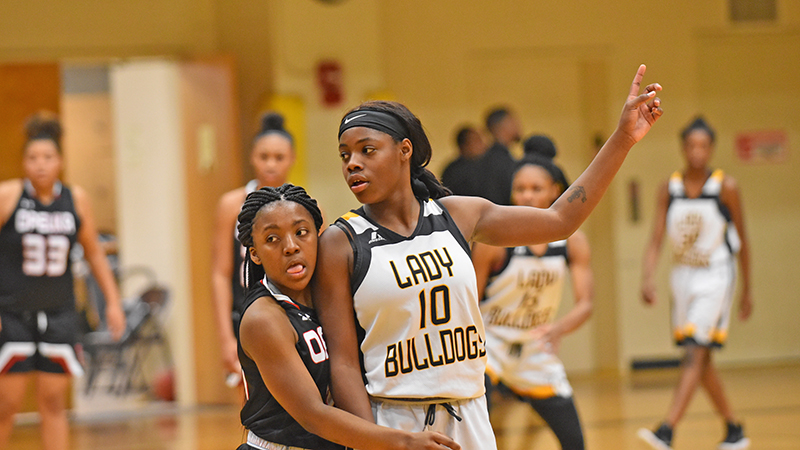 Feliah Greer calls for the ball against Opelika. --File Photo

The LaFayette girls’ basketball team has one major change going into the 2019 season — a new coach.

Former coach Michael Bratcher and his family moved to Texas as his wife was hired at Texas Tech. The Bulldogs have hired Fred Bridges as Bratcher’s replacement.

Bridges takes over a team that went 19-8 last year and brings back most of its roster from last year, as it lost only one senior.

“The girls are very athletic and very talented,” Bridges said. “But what my coaching style is that I will to teach the girls how to be athletic and fundamentally sound as a basketball player.”

This year’s team once again only has one senior, but it has a strong junior class.

One of the key returners is junior Feliah Greer.

“Her talent is raw, but the things we are teaching her will make her a better player,” Bridges said. “You can have raw talent, but you need fundamentals to coincide with your athleticism. It’s fun to watch her.”

Greer was the team’s leading scorer as a sophomore and scored 37 points in the team’s season opener.

Outside of Greer, Bridges named Ebony Williams to step up and take some offensive pressure away from Greer. She scored 14 points in the team’s only game.

With an experienced lineup, Bridges doesn’t have to worry about being the only coach on the floor.

“They’re pretty much buying into the system we have in place, and they’re taking the younger girls under their wings to teach them what we’re trying to instill in the program,” Bridges said. “You have to be coached so you can help coach, so we help them to coach each other.”

One of Bridges’ big emphasis is he wants the girls to be students first because being a student in the classroom will help the team on the court as well.

“You’re a student athlete. You can learn in the classroom, and you can learn it [basketball] as well,” Bridges said. “We’re teaching the girls to be able to have self confidence in their abilities as a player. We’re teaching them how to connect together as a team and not on the individual basis.”

The Bulldogs lost their season against opener by six to Russell County, Bridges’ previous coaching stop. They lost by six in the opener.

“It was pretty cool, to the point that I knew all the girls from last year,” Bridges said. “It was a bittersweet moment, but at the end of the day as a coach, you always prepare yourself to win.”

The Bulldogs play their second game on Thursday, when they travel to Opelika. Tip is set for 6:30 p.m. EST.