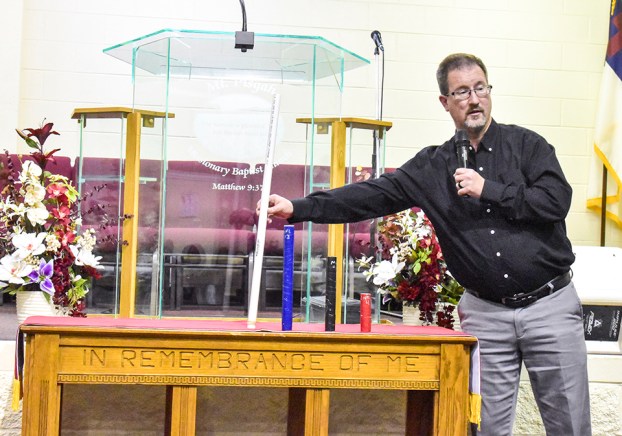 Adrian Carpenter, program supervisor at Circle of Care, led the discussion by describing what human trafficking is, statistics about trafficking and what signs to look for when a person suspects trafficking in the community.

The Trafficking Victims Protection Act of 2000 and its subsequent reauthorizations define human trafficking as:

4 Sex trafficking in which a commercial sex act is induced by force, fraud, or coercion, or in which the person induced to perform such act has not attained 18 years of age; or

4the recruitment, harboring, transportation, provision, or obtaining of a person for labor or services, through the use of force, fraud, or coercion for the purpose of subjection to involuntary servitude, peonage, debt bondage, or slavery.

Carpenter said human trafficking is the seventh-largest criminal industry in the world and generates more income than the NBA, MLB and NFL combined annually. He said the industry also recently passed illegal arms a few years ago and is closing the gap on the drug industry.

According to the FBI, the average age of initial exploitation into sex trafficking is 12 to 14 years old.

Also, Carpenter said authorities believe about one in six reported endangered runaway children are believed to be victims of human trafficking. He said just because the children run away, that doesn’t mean they will be trafficked, but they do become more vulnerable.

“That could be running away physically from home or that could mean running away emotionally from home,” he said. “What we have to do as a community is help coach other families around us to ensure that home is a place that children are running to, not away from.”

When talking about statistics, Carpenter said a 2017 University of Alabama study revealed that there were 1,167 victims of human trafficking rescued and that 665 of those were minors. Additionally, he said the FBI believes those numbers only represent about 10 to 18 percent of actual human trafficking numbers.

Some signs that a person could be involved in trafficking could be if a person is disconnected from their family, friends, and the community, especially if they were involved recently. Also, other signs are if a person suddenly has expensive clothes and accessories or if there is always a person speaking for them.

“A trafficker will make it so the victim does not have a voice,” Carpenter said.

LaFayette Police Chief George Rampey said he felt it was important to host such a forum. The information was not only for the community but also for his officers.

“It is our goal to keep LaFayette safe,” he said. “I want my officers and citizens to have the most information possible.”

Carpenter said January is National Human Trafficking Month, and he hopes all municipalities will pass proclamations to commemorate the month.