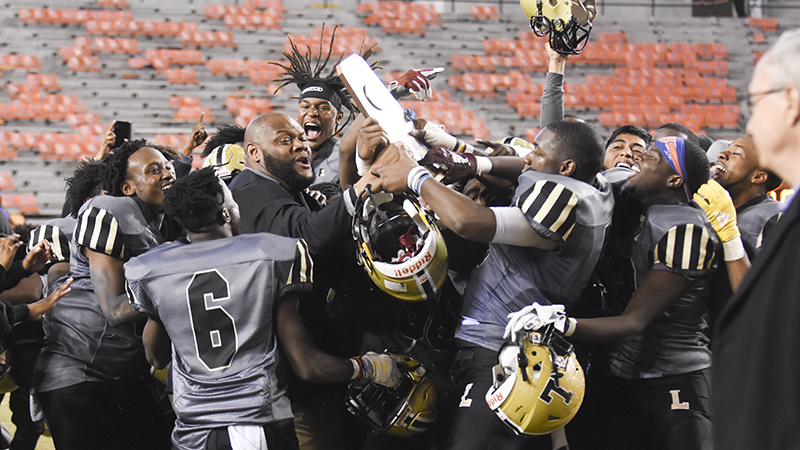 Lanett trailed 16-7 early but rallied behind a four-touchdown game from MVP Kristian Story.

“I am so happy for my team. They really fought through a lot of adversity this year,” Lanett coach Clifford Story said. “They stayed the course, and they love each other. This is a group of kids that spend a lot of time together.”

Story scored three times in the second half and ended up with two forced turnovers as the Panthers rallied for a decisive 41-30 win. ¬

Just as they had for most of the playoffs, the Panthers relied on the passing game. Story finished with 249 yards through the air, and Travaunta Abner finished with 79 yards and an early touchdown. He had a couple of big catches early in the game to help spark the offense.

“Abner works extremely hard. At practice, he makes some great catches. Sometimes I have to get onto him for making too many one-handed catches,” Clifford Story said. “We knew the things they were doing on the back end were going to allow him to make some catches.

“Early on, I just said ‘let’s attack with him until they can stop him.’ He was able to make some big catches early on and help propel us to this victory.”

Even after Abner’s touchdown, Lanett trailed Mars Hill Bible 8-7, thanks to an opening 1-yard touchdown from Justus McDaniel. Lanett elected to kick an extra point instead of going for two.

Peyton Higgins ran for a 8-yard touchdown and after a two-point conversation, putting Mars Hill up 16-7 with 2:21 left in the first quarter.

D’Quez Madden scored on a 3-yard run to answer for Lanett to make the score 16-14. After Lanett came up with a stop, Brandon Smith scored on a 6-yard run to give Lanett its first lead of the game with 7:53 left in the first half.

Mars Hill immediately responded with a 20-yard run 3:04 left in the half, putting Mars Hill Bible up 22-20.

Lanett scored on its first drive of the second half, capped by a 2-yard run by Story.

After a stop, Lanett took its first two-touchdown lead of the game on their next drive.

Story’s second rushing touchdown was one of his more exciting plays of the year. He took the snap in the shotgun and started to run up the middle. Once the Alabama commit saw the lane was clogged, he bounced to his right and got to the corner. He turned the corner, ran inside just enough to juke out a defender and shook off another. He proceeded to charge forward, ending with a 52-yard touchdown run to give Lanett a 34-22 lead.

Mars Hill answered with a 1-yard touchdown run by McDaniel with 11:58 left to play.  Just 40 seconds later, Lanett put the game away when Story connected with a Jaquar Houston on a 30-yard touchdown with 11:18 left. With that touchdown, Story threw his 175th touchdown. He also finished his career with more than 13,000 yards, the first player in AHSAA history to hit that mark.

“I’m not a stat guy, but he had a remarkable career,” Clifford Story said. “I’m happy for him as his dad and his coach, but there were times where he would just will us to victory. Thirteen thousand yards, that’s a great thing.”

On its last two possessions of the game, Mars Hill turned the ball over, one fumble, the other an interception. Both turnovers ended up in the arms of Kristian.

“When I saw the quarterback roll, I just looked for my nearest threat,” Kristian said. “When I saw him and the ball, I was like ‘oh this will be a crazy way to end it’ so I had to get it. When I came down with the ball, it was like ‘wow, we did it.’”

The interception was the 29th of his career, which is the third most in Alabama history. Dametrious Johnson led the team with eight tackles, all solo, while Kristian was second with six, two assisted.  Lanett’s seniors finished with a 50-5 record.

Lanett finished with 402 total yards and Mars Hill Bible had 421, with 300 of those coming on the ground. McDaniel had 157 yards and three touchdowns for Mars Hill, and Higgins had 115 yards to go with his one score.