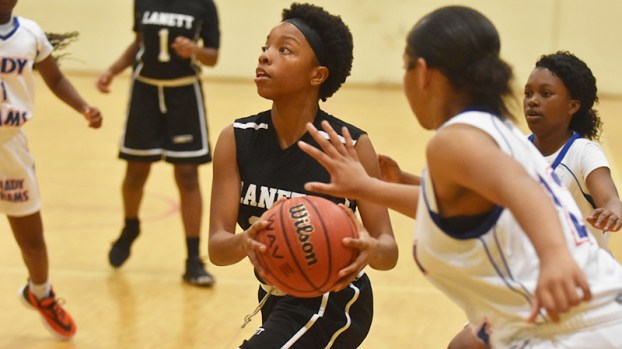 Early in the first half, the Lanett junior-high girls basketball team was in complete control as the Panthers cruised to a 27-8 win over Valley.

“They put out a little more effort today and were a lot more consistent,” Lanett head coach Earnest Webb said. “To hold a team to eight points in the entire game, what more can you ask for?”

The Panthers’ defense was the key in the blowout win. They ran a full-court press for most of the game, which caused havoc for the Rams.

Valley struggled for most of the first half to beat the press, usually turning the ball over before half court. This gave the Panthers the ability to score quickly, which they did for most of the game.

“It’s been something we’ve been working on the last three weeks,” Webb said. “I just wanted to experiment with it.”

The Panthers did most of their damage in the second quarter. They outscored the Rams 7-0, which all but sealed the game as they went into the half up 11.

“I didn’t expect us to shoot the ball like that,” Webb said. “We hadn’t shot the ball very well the last three games.”

The second half started right where the second quarter ended. Lanett continued to run its press, forcing Ram turnovers. The Rams scored just one basket in the quarter, which was a three.

In the fourth quarter, neither team was able to shoot consistently, but the Panthers once again relied on their defense, holding the Rams to zero points in the final six minutes of play.

“You win some, and you lose some,” Valley coach Trish Watson said. “We’re a young, inexperienced team. We have some growing to do.”

Webb was especially pleased by Tierra Williams’ game. She finished with six points, half of which came from her one three she made in the second quarter.

“I tell her all the time you have one job: shoot the ball and play good defense,” Webb said. “I think she did that.”

One area that Webb wants to see his team improve is the free-throw line. The Panthers finished just 3-of-11 from the charity stripe.

Rivalry games always mean more than any other game, and that was true on Monday night when the Valley junior-high... read more