New Horizon Theatre to present ‘Closed for the Holiday’ this weekend 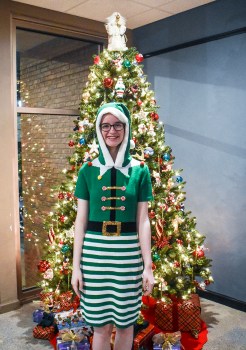 Gracie Otto plays an elf in Closed for the Holidays. 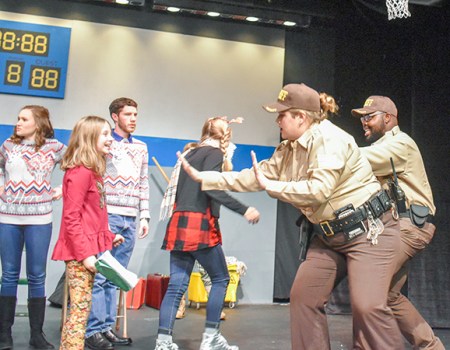 A sheriff and deputy try to calm the crowd stranded in the Valdosta Community Center in the play Closed for the Holidays. 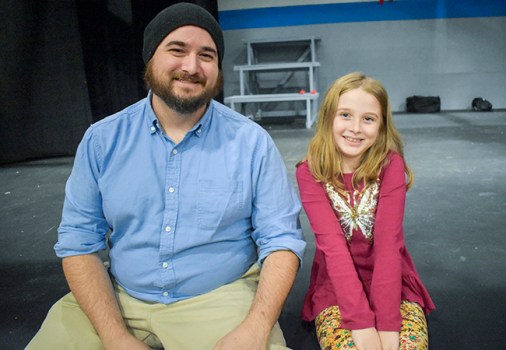 Real-life dad and daughter James and Anna Murphy at practice for Closed for the Holidays. 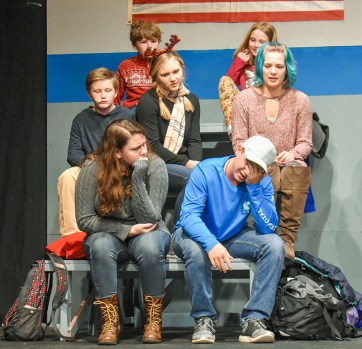 In Closed for the Holidays, a drama class is stranded at a Community Center in Valdosta. 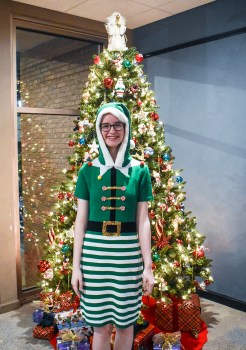 Dana — will get info 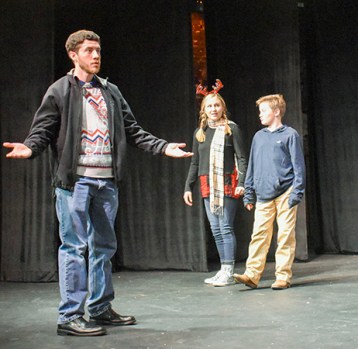 No one wants to be stuck at a Community Center over Chirstmas in the play Home for the Holidays at the New Horizon Theater. 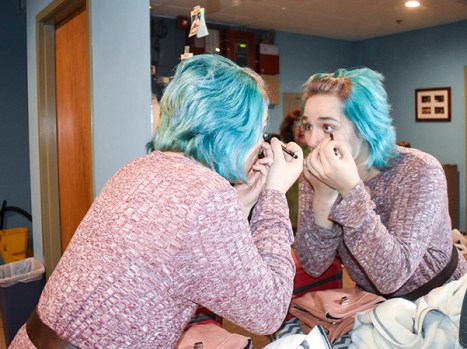 Elizabeth Crosby prepares to go onstage for dress rehearsal of Closed for the Holidays at the New Horizon Theater. 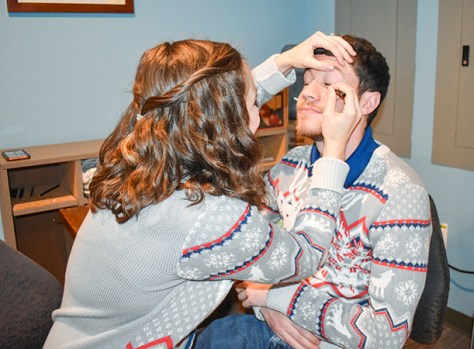 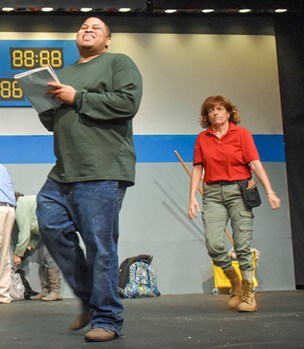 In the play, a neighborhood kid keeps showing up at the Community Center and custodian Flo keeps running him off. 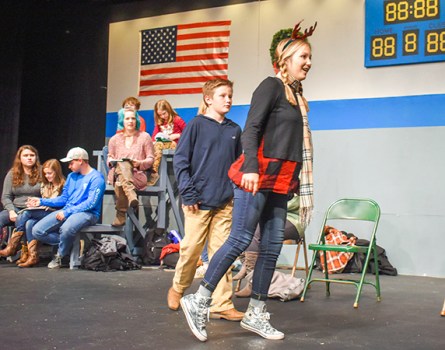 A drama class is stranded at a community center in Valdosta in the play Closed for the Holidays at New Horizon Theater.

WEST POINT — In New Horizon Theater’s latest comedy, ‘Closed for the Holidays,” a drama class is going home to Tampa when they get stranded by snow and ice in Valdosta.

They find a community center serving as a shelter, and realize they are going to be stuck there through Christmas.

The show’s characters include Flo, the custodian who is unprepared for incoming guests; a couple trying to get to their Christmas wedding in Miami; the drama class; the sheriff and a deputy; and some questionable elves, according to director Bill Nixon. Everyone wants out of the shelter, and no one is happy.

“This play is unique because it has many groups with different storylines that all work together,” cast member Zeke Weldon said.

Weldon plays a narrator of sorts, who walks in and out of scenes composing a poem on what’s happening.

“This is one of my favorite shows so far,” said cast member Donna Stewart who plays the bride-to-be. “This one is a challenging character.”

Patti Landreau is another returning player. She said her kids got her into the theater. This production has quite a few families playing together. A mom is in the play with her two kids, a brother and sister both have roles, and a father is in the play with his daughter.

James Murphy and his daughter Anna have been in shows before, but this is the first they’ve done together.

“I begged my dad to do it,” Anna said, whose most recent role was as a townsperson in Frozen Jr.

“In Closed for the Holidays,” Anna does not play her dad’s daughter but has still gotten a lot of time with her father.

“We’ve been learning lines together,” James Murphy said. “It’s been a good thing for us to do together, to connect and do something fun.”

This show has 22 actors, and 9 are in their first play, according to Nixon.

Steven Dobbs is in his first show, as the traveling groom. Dobbs’ only other stage time has been as part of the worship team at LaFayette Heights Baptist Church. He and co-star Stewart both help lead the music on Sundays. During the week, Dobbs works at a bank and has to rush to play practice, but he says the extra work is enjoyable.

“I’m finding something else I love,” he said of acting. “I may be getting hooked.”

Elizabeth Crosby has acted before, but this is her first non-speaking role. She plays a pantomime actor who is serious about her craft.

“You have to be very strong,” Crosby said, “You use your body to express.”

Nixon said this play did not come with a lot of stage direction, so Crosby has been able to do a lot of improvising in her silent role.

“There’s a lot of moving parts, a lot going on,” Nixon said of the play. “This was written for all the characters to be on stage all the time. But I wrote in some changes, to keep kids from having to be on the bench for two hours.”

Nixon brought in an assistant stage manager just this week. Jaylin Pope, who played Peppermint Patty in “You’re a Good Man, Charlie Brown” was up to the task.

“I’m excited for the opportunity to learn all the new faces,” Pope said.

Nixon said this has been a strong season for the theater.

“Frozen was sold out, (and) Charlie Brown was great,” he said. “The next two are Agatha Christie, then Beehive, which has only six women and a live band.”

Closed for the Holidays runs Dec. 12 to 14 with performances at 8 p.m. nightly. An additional matinee will be Saturday at 2 p.m. Tickets are available through nhct.org