Next Chapter: Lanett’s Story signs letter of intent with Alabama 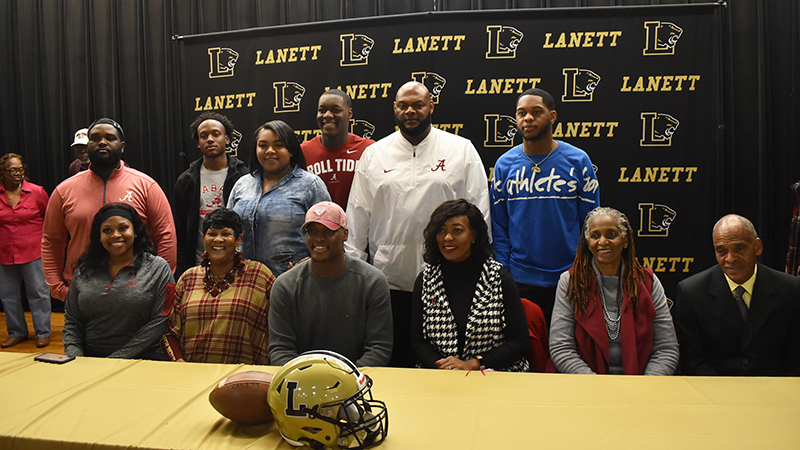 Surrounded by his family, Lanett quarterback Kristian Story fulfilled the dream he had since he was a child: to play for the University of Alabama. He made it official on Wednesday, signing his letter of intent in the Lanett Auditorium.

“My emotions right now all over the place really,” Story said. “It’s a surreal feeling just knowing that I grew up Alabama fan, dreaming of playing for them, and now that I’m actually signed to go play for them it’s surreal.”

Even though he grew up an Alabama fan, Story made sure Alabama was the place for him. Outside of being a top program in the country every year, Story felt he would be challenged academically as well in Tuscaloosa.

Before he signed, Story was greeted by Lanett mayor Kyle McCoy. McCoy gave the quarterback a plaque listing his many accomplishments as a Panther.

He was followed by Lanett assistant football coach Chip Seagle, who brought up different memories of the years the two have spent together.

The memory that stood out started in the spring of Story’s freshman year.

Seagle, a lifelong Alabama fan, asked Story if he were to commit to Alabama, would he drive to Fort Mitchell and take a picture with the Seagle brothers and their father’s tombstone. Seagle said his father would be proud that he coached an Alabama player.

On July 18, Story committed to Alabama. Just as he did after every visit, Seagle got a call from the Storys on their way back.

“Coach, I reckon we’re going to Fort Mitchell,” Story said. “We’re going to take a picture with your daddy’s grave.”

Like McCoy, Seagle had a gift for the four-star prospect. When Story was a child, he broke a mirror on Seagle’s truck. The cost to fix the mirror was $125. Seagle gave Story the bill on Wednesday.

“In three or four years, your butt is going to pay me Ken Ken,” Seagle said.

More than 20 family members surrounded the high school senior as he signed his letter of intent.

“Throughout my whole life as far as I can remember I’ve always had a great support system, so I didn’t expect anything any different,” Story said. “I know they’ve always supported me throughout anything else I’ve ever done in my life. For them to turn out how they did, it just made it even more special for me for at this special moment.”

After putting pen to paper, different family members shared stories of him as a child.

One of his grandfathers recalled a time where Story and his brother Tre were arguing while on a drive to the fair. They both were disciplined by a whooping for acting out. Kristian laughed during his.

“I knew then he was going to be a good football player,” the grandfather said.

Story leaves Lanett as one of the best players in Alabama history. He threw for 9,072 yards (eighth all time), totaled 13,219 yards and 175 touchdowns (both are AHSAA records) and intercepted 29 passes (third all time).

This earned him an athlete role on most recruiting websites, meaning there is a chance for him to play on either side of the ball.

He signs as the No. 6 athlete and No. 9 player from Alabama.

“I’ll play wherever they put me… I’m ready to play,” Story said.

He has been projected as a defensive back, mainly safety, at the college level.

Story will remain at Lanett to finish his high school career. This way he can play basketball and baseball, while running track.

He signs as a five-time state champion, three in basketball and two in football, but his favorite memory as a Panther was winning his two football titles.