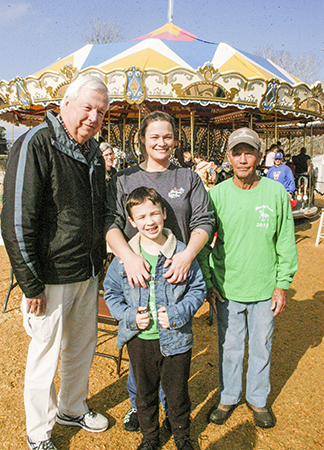 Valley’s Christmas Merry-Go-Round hit a remarkable milestone this past weekend.

The merry-go-round, which started in 1956, had its three millionth rider get on the carousel. Seven-year-old Ethan King of Lanett received a $100 gift card to Walmart, a bag of candy, a free merry-go-round T-shirt and other prizes.

It’s amazing for anything to continue for 63 years, especially a merry-go-round. It started as a Christmas gift by the West Point Manufacturing Company, but the City of Valley took it over after the mills closed and has kept the tradition going.

There are some people in the Greater Valley Area who don’t consider the Christmas season underway until the merry-go-round is open and operating.

There have been many changes in the world over the last 63 years. Many of the people reading this may not have been alive 63 years ago, but the Christmas carousel was sitting in Valley then, operating on a Little League Baseball field behind the Fairfax Theater.

Valley wasn’t even a city then.

To think that a tradition that started in 1956 continues today is a true testament to everyone involved in getting the carousel here, including Richard Tinsley, the owner of Tinsley’s Amusements in High Hill, Missouri. Tinsley’s company rents out the merry-go-round to the city of Valley each year, and he travels here to help get it set up.

Now, 3 million people have ridden the carousel. Many adults are now taking their children to take part in the same tradition. How cool is that?

Anyone wanting to ride the merry-go-round before it closes this year will need to get out there by Christmas Eve, which is the last day its open.

Of course, many of you already have. After all, it’s a community tradition.