OUR VIEW: Stepping forward to the future 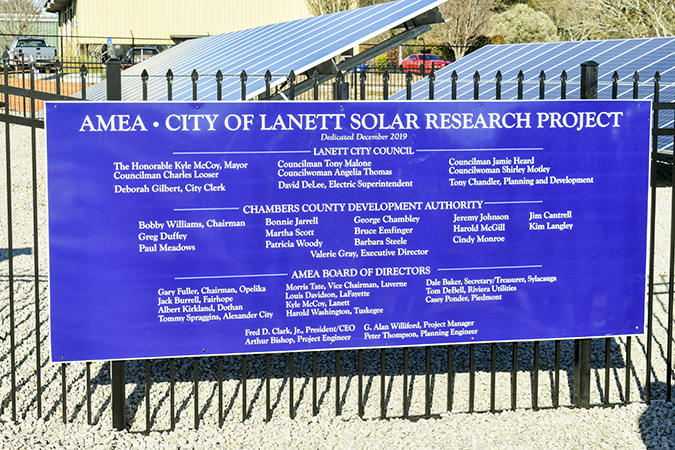 The dedication of a 50-kilowatt solar project Wednesday afternoon is a big step in the right direction for the City of Lanett.

Lanett utility customers will now get a portion of their power directly from the sun. Solar is now part of the mix being provided by the Alabama Municipal Electric Authority (AMEA) to its 11-member cities. It’s a diverse mix of sources, including coal, nuclear, natural gas and hydropower.

AMEA President Fred Clark and Opelika Mayor Gary Fuller both expressed amazement with how fast the redevelopment of the former Lanett Mill/Lanett Bleachery & Dye worksite is progressing. That’s a good reflection on the city and something people see thanks to the work that’s been done by city employees taking on the difficult task of cleaning up a broken brick and concrete laden 27-acre site.

AMEA invested $85,000 in the Lanett site. It sits on 1 acre of land and contains 160 solar panels assembled in four rows facing west. The fixed-axis system is configured this way to maximize energy production during the peak hours of the day. There are identical solar project sites at the AMEA office in Montgomery and in member cities LaFayette, Opelika, Tuskegee, Alexander City, Dothan, Luverne, Sylacauga and Foley. The final two will be going up in Piedmont and Fairhope. AMEA has invested more than $1 million into the overall project. Clark and the AMEA board of directors deserve praise for taking a bold step toward being ready for the future.

All these solar test sites can serve as car charging stations in the not-too-distant future. It’s something the energy people need to get ready for. An AMEA engineer present for the Wednesday ceremony said that close to half of the vehicles on U.S. highways in the year 2040 would be powered by electricity.

There was a time when no one could imagine a telephone you could hold in the palm of your hand or a flat-screen TV. These are commonplace today.

Things are continually changing through innovation. The same will take place with motor-driven transportation. It’s only a matter of time. It will be cheaper and more practical to drive electric-powered vehicles. As a society, we need to be ready when this transformation takes place. Having car-charging stations is a step in the right direction.