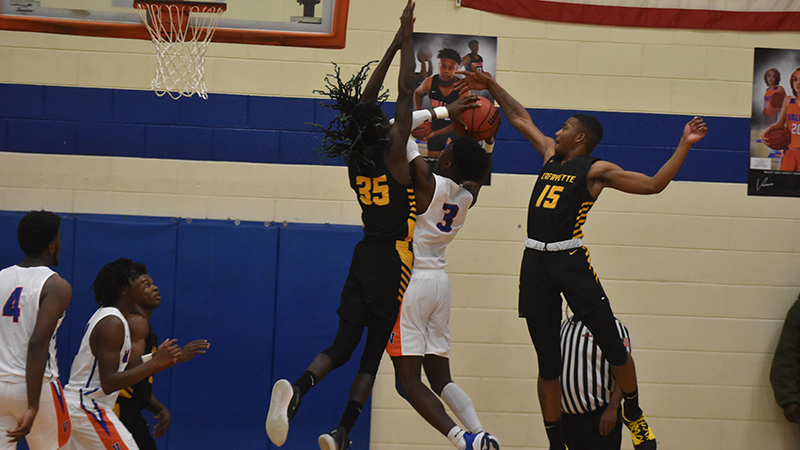 The LaFayette Bulldogs used a full-court press that led to a 15-0 run in Friday’s win against Valley. --Cody Estremera

Starting the second half, the game looked all but over. LaFayette led Valley by almost 20 and looked like it was going to cruise to another win. It won handily, defeating the Rams 76-50, but not before the Rams made it interesting heading into the fourth quarter.

Valley needed to score out of the halftime break, as it had managed only 25 points at halftime. It came out on fire, hitting its first three shots (two threes and a layup), cutting the deficit to 10. The deficit reached single digits a couple times throughout the quarter, but at the start of the fourth, the Bulldogs led by 10.

With 5:41 left in the game, LaFayette led by 12. This dip in the lead caused Bulldog head coach Obadiah Threadgill to change his defense to a full-court press.

This sealed the game, as the senior-laden Bulldogs rattled off 15 straight points in less than two and a half minutes.

“We have the ability to score a lot of points fast,” Threadgill said. “They are such an explosive group. They can all handle the ball. They can all shoot, so all they have to do is share it.”

The press forced the Rams to turn the ball over. When they weren’t allowing turnovers, they missed a good amount of threes, allowing LaFayette to get long rebounds that translated into quick points.

“We started doing some things that we weren’t doing to get back into the game,” Harper said. “That’s a veteran group that we just played. We competed with them.”

The Bulldogs started the game quickly, scoring 15 of the first 20 points of the game. A big reason for the opening lead was the fact the Bulldogs were able to make a couple threes, while the Rams did not convert their opportunities. At the end of the first quarter, the lead was already 14.

One of the big difference makers in the game was sophomore Antavious Woody. Woody, who was a starter for most of his freshman year, stands 6-foot-4 and weighs more than 250 pounds.

The sophomore, who plays for the LaFayette football team, is working his way back into the starting lineup because he isn’t in basketball shape yet.

He was a force inside for the Bulldogs. The sophomore was able to get offensive rebounds and second-chance opportunities off missed shots.  He finished with 13 points off the bench.

“That’s our Big Baby [in reference to former NBA player Glen “Big Baby” Davis],” Threadgill said. “Any time he plays with a high level of energy, he is very tough to guard. Along with these other guys, you basically have to play him one-on-one.”

The Rams were down one of their key players, as starting point guard KD Hutchinson missed the game with an ankle injury that he suffered on Tuesday.

This allowed Demarice Farrow and Kalen Sherrell to step up as primary ball handlers.

“They had to get some experience,” Harper said. “They gained experience and that’s the best thing for them. They had a chance to get in the fire against some good competition… Overall, I was impressed by them.”

LaFayette plays its third game in as many days on Saturday when it hosts Bullock County. Valley travels Smiths Station on Tuesday.