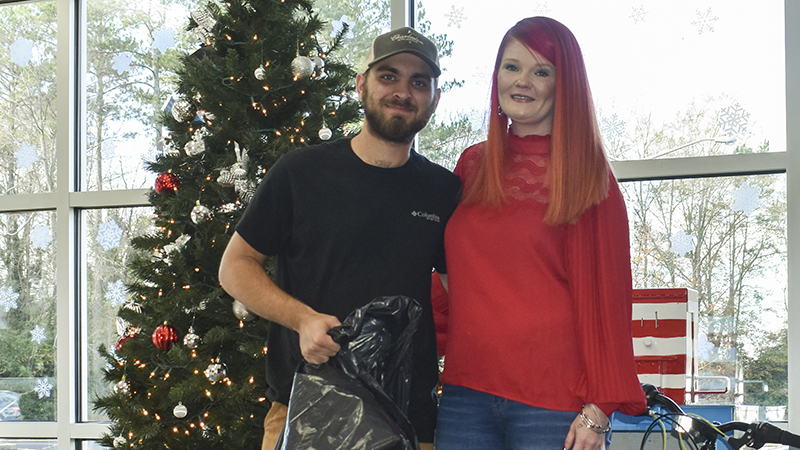 WEST POINT — Chris and Tiffany Duck were in a different stage of their lives a year ago.

In 2018, Christ Duck as suffering from aortic stenosis, which kept him from work, and Tiffany Duck was in the early stages of starting a business. During this same time, the couple was trying to raise three children and provide them with a good holiday.

The Duck family learned about the Troup County Salvation Army’s Tree Angel program in conjunction with the City of West Point, which provides presents for low-income families in West Point.

“We didn’t know how we were going to do it,” Tiffany Duck said. “If it weren’t for them, our children wouldn’t have gotten anything. Everything was hitting us at one time.”

However, one year has made a big difference for the Duck family.

Chris has started to receive adequate medical care and said he feels much better, and Tiffany’s business is doing well. Not only did the family not need the services of the Angel Tree Program, they adopted a child themselves in 2019.

“We have been blessed this year, so we wanted to give back,” Tiffany Duck said. “We wanted to make sure somebody else’s child has a good Christmas.”

On Monday morning, parents of more than 80 children gathered at the West Point Youth and Recreational Center on OG Skinner Drive to pick up presents that may make their children’s holiday.

The program allows individuals in the community to “adopt” children in the community and provide gifts during the holidays. The process starts in October when the city and the Salvation Army begin to take names of families who qualify.

Those adopting the parents purchase several presents based on a form filled out by the families tailored to the child’s interests.

Also, helping the process are the Friends of the City of West Point. They raised money to purchase several bicycles for children. If the adopted parents bought one or two gifts, the organization provided a few more from the Salvation Army warehouse in LaGrange.

This year, Monica Barber, West Point community development specialist, said there were no children who weren’t adopted. However, if there were, the Salvation Army would step up and provide presents for those children.

“It is exciting to know that you are helping children,” Barber said. “Especially children that may come from low-income children to have a happy Christmas.”

She said this program is special to her because so many entities come together to make it happen. She said the city, the West Point Fire Department, Power Train, Friends of the City of West Point, the Salvation Army and those who “adopted” children, all were involved in making the holidays special for these families.

On Monday, the Chattahoochee Fuller Center surprised the city with several stockings for the children, which included socks, ear muffs, candy and a Santa Claus hat. Any additional stockings were taken to the West Point Active Life across the street by West Point Mayor Steve Tramell.

“This is a wonderful thing for the families of West Point,” Tramell said as he was helping move presents for families Monday morning. “I love to see this happening.”

West Point Councilwoman Sandra Thornton, who is on the board of the Troup County Salvation Army, said this event strikes personal strings on her heart.

She remembers a Christmas when her mother didn’t work, and her father was a pastor but did odd jobs for money. She said her family had $50 to spend on all eight of their children, but it was stolen before it could be spent.

Thornton said that Christmas consisted of apples, oranges, peppermints and nuts. She said she doesn’t blame her parents because they always tried to best they could to provide for their children, but that one Christmas sticks out in her memory. Now, she wants to make sure all children have at least one thing for Christmas morning.

“When Christmas morning comes, I want to make sure every child has something under that tree,” Thornton said. “That is why everybody works so hard for this project.”