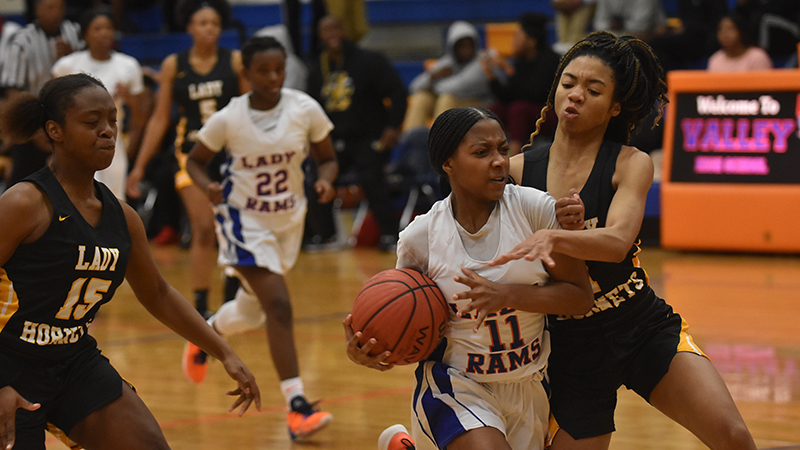 Jasmine Frazier fights through contact to put up a shot against Bullock County.--Cody Estremera

After the first eight minutes of play, the Lady Rams led 12-6, mainly because of senior guard Arieana Magby and senior Kwane Cofield. The pair scored nine of the 12 points, hitting all four shots from the floor.

The Lady Rams came out on a tear in the second quarter, outscoring the Hornets 17-6.

Magby continued her hot streak in the second quarter, hitting all three of her shots in the eight-minute quarter. She finished the half with 11 points. Fellow senior Arteria Florence added six points in the quarter, giving her seven at the half.

At halftime in its loss to Harris County, the Lady Rams trailed by 12, only scoring 15 points. On Tuesday, they led 29-12.

The second half was a much more tightly contested game, with the Lady Rams outscoring the Hornets 25-24, but Valley’s second quarter lead was too much for Bullock County to handle.

The big difference was the defense. The Lady Rams ran more man-to-man defense, mainly a full-court trap, which led to more turnovers and quick offense. They mixed in the 2-3 zone (two players up top chasing the ball handler, while the back three players guarded against inside passes and drives) in the half-court.

“Our defense was a lot smoother,” Trammell-Mangram.

Magby led all scorers with 18 points, while Florence finished with 16. Anijah Patrick and Kenda Watson combined for 11 points off the bench. As a team, the Lady Rams shot 50% from the floor, making 16 of their 32 shots.

Free throws remain to be an area of emphasis for Valley, as the Rams finished just 7-of-17 from the line.

Valley is back in action on Friday when it hosts LaFayette.