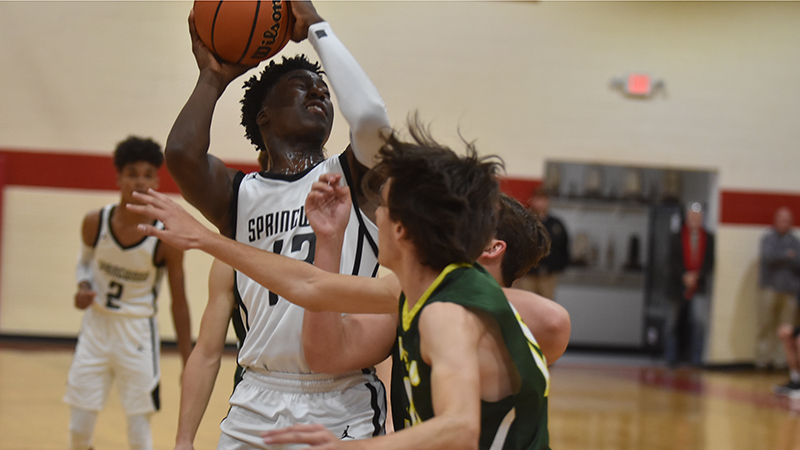 Springwood’s Francis Okeyla is fouled when driving to the basket.-- Photo by Cody Estremera

Thursday night’s 65-57 loss to Edgewood couldn’t have gotten off to a worse start for the Springwood varsity boys team. It allowed 11 straight points to start the game, finished down 15 to end the first quarter.

The deficit grew to 18 points early in the second, but then forward Francis Okelya woke up.

For most of the first quarter, Okelya was flanked by at least two defenders and could only score two points. In the second, he started fighting through contact., scoring 10 of the Springwood 18 second-quarter points.

“Francis is a special guy,”  Springwood head coach Lisa Sampson said. “He’s a leader, and we know the offense has got to run through him for us to be successful. Like I was telling the refs, kids are hanging on him, and he’s still making shots.”

Coming out of the halftime break, Springwood still trailed by 17, but just as she did with her girl’s team, Sampson made a key adjustment.

This time, she changed her defense, going with man-to-man in order to neutralize Edgewood’s perimeter shooting. The switch worked, as Sampson’s squad only gave up six points in the third quarter.

Offensively, Springwood came out on fire from beyond the arc. It made four threes, three of which by Bryant Teel.

“They’ve got to believe that they can compete with anybody,” Sampson said of her team. “They didn’t believe that in the first half, so the second half, we adjusted some things and challenged them.”

The comeback ran out of steam in the fourth quarter, as Edgewood got to the free-throw line ample times. It outscored Springwood 20-14 in the closing quarter.

Springwood travels to Oak Mountain for its Friday game.