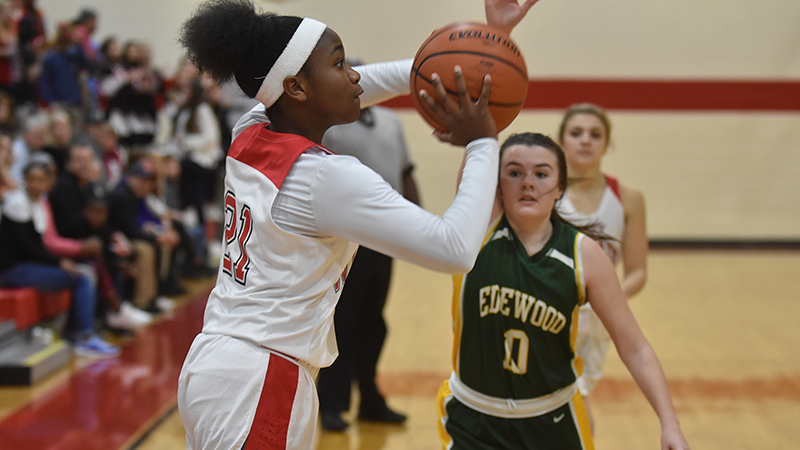 Entering halftime, the Springwood varsity girls team struggled to keep Edgewood off the offensive glass, allowing it to build a six-point lead.

Springwood head coach challenged her girls to box out and rebound the ball, and they did just that in the second half, catapulting the team to a 48-45 win.

“We talked about rebounding and just effort at halftime,” Sampson said. “I challenged them. I was really proud of the way they fought through a tough game. This showed me a lot of heart.”

Springwood was able to score early in the second half, allowing it to set up its defense. This allowed for the zone to take full effect, forcing turnovers and leading to quick points.

Springwood took the lead at points during the third quarter, but at the end of the eight-minute mark, it still trailed by two.

In the fourth quarter, the two Springwood seniors stepped up, scoring eight of the 14 fourth-quarter points.

Defensively, Springwood did a much better job of forcing jump shots and swarming the paint on drives. It allowed just two baskets, both threes, in the fourth quarter.

The game was a rematch, as the two Wildcat teams met during a Thanksgiving tournament. Since Edgewood knew Springwood liked to pass around the three-point line looking for a quick pass to break the zone, it was able to combat that motion for most of the game. This led to a change by Sampson. She started to overload one side of the floor, allowing her team’s size and athleticism to wear down its opponent.

Guard McKayla Barber was everywhere on the floor in the win, finishing with a team-high 13 points. Outside of her scoring, the senior ran the offense, finding open teammates for most of the night.

Barber also was a big force on the defensive side of the ball, as she blocked shots, rebounded and dove on the floor after loose balls.

“McKayla has been huge for us all year,” Sampson said. “It was not one of her better shooting nights, but she held in there. She made a big difference for us.”

When Barber wasn’t running the point, Sampson relied on sixth grader Tori Patillo. She was able to spread the floor and start fast break opportunities.

“She doesn’t play like a sixth grader. She got a little bit nervous in the first half, but she adjusted,” Sampson said. “She’s a special player.”