Springwood girls hold on to fourth-quarter led to defeat Chambers 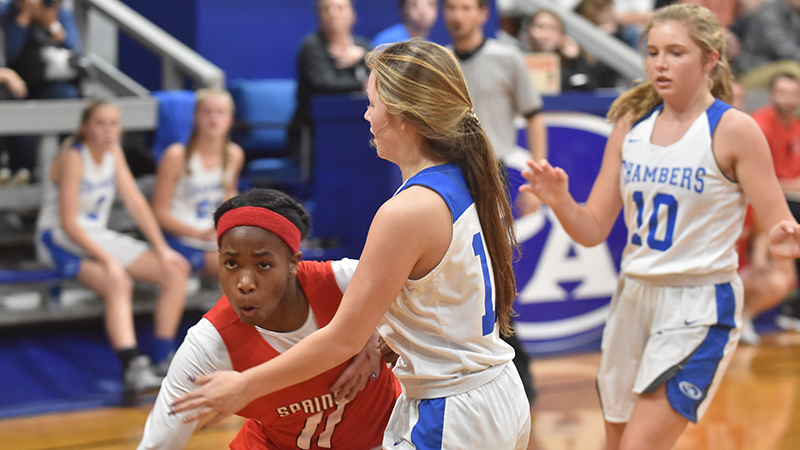 Sixth grader Tori Patillo drives towards the rim in Springwood’s win against Chambers.

At the halftime break, the score was knotted at 24, so Springwood head coach Lisa Sampson decided to make a change.

“We called a set with four low and Tori [Patillo] up high taking it to the basket,” Sampson said. “It worked really well. They overplayed her, and we had a dump down to our bigs.”

Patillo was a force for the entire game. The sixth-grade guard scored nine points in the second quarter and was able to attack the basket, setting up her teammates for easy shot opportunities.

One example of that was when Patillo drove from the top of the key, crossed her defender and threw a hook pass to a teammate in the post for an easy layup.

“She’s an incredible player as a sixth grader,” Chambers Academy head coach Jeff Hines said. “Her ceiling is way up there.”

The Rebels struggled in the third quarter, finishing the eight-minute quarter with six points. The difference in the quarter was the Wildcats defense.

Springwood runs a full-court press defense for most of the game. That press forces teams to push themselves harder on simple plays like inbounds.

The Rebels did a nice job avoiding the press in the first half, but with only eight players dressed out for the game, the fatigue ran into them at the start of the third.

“We just started panicking a little bit, and the fatigue factor weighs in on it,” Hines said.

The Wildcats allowed just 13 points in the second half, five of those were scored from the free-throw line.

Senior guard McKayla Barber finished with a game-high 16 points for the Wildcats, four of which were scored at the free-throw line. Fellow senior Andi Martin added eight points.

Junior Britten Stephens finished with a team-high 12 points for the Rebels, while sophomore Lexi Smith and junior Brandalon Rombokas each scored eight.

The Springwood girls play Autauga Academy in the championship game on Saturday at 4 p.m. CT, while Chambers will play LaGrange Academy in the consolation game at 1 p.m. CT.