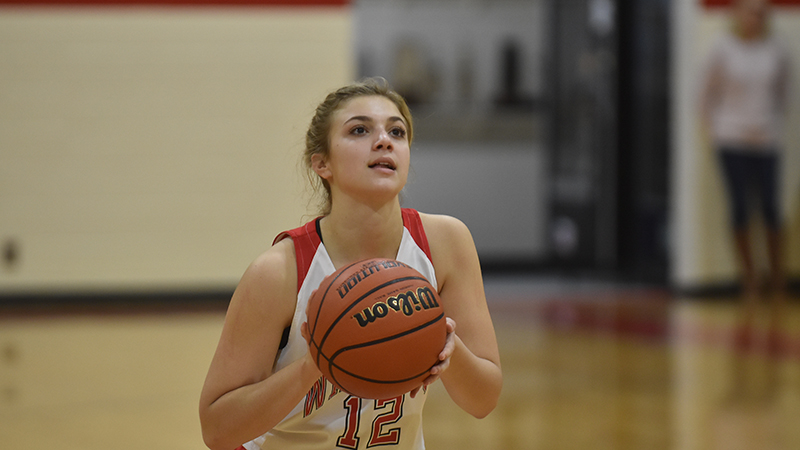 Junior Lucy Spivey shoots a pair from the free-throw line in Springwood’s win against Edgewood.-- Photo by Cody Estremera

After winning its first seven games to start the season, the Springwood girls basketball team had a gut check. It trailed for a majority of the game against Edgewood, before coming back to seal the victory.

The Wildcats winning streak came to an end when they lost to Oak Mountain 24 hours later.

“We had beat that team by double digits when we played them before, so it was a little disappointing from that standpoint,” varsity head coach Lisa Sampson said. “We’ll learn from it and will be better for it.”

Sampson’s girl’s squad runs the full-court pressure extremely well, which could cause problems for the young Rebels.

With this being her first year at Springwood, Sampson has not experienced the rivalry between the two AISA schools, but her teams are ready for the opportunity to win the first matchup.

“We have not seen Chambers this year, so we’re excited,” Sampson said. “In talking with the players, that seems to be a pretty big rival game.”

When the Springwood boys lineup against the Chambers boys in the last game in Friday’s tournament, there will be one key player missing for the Wildcats.

Senior Francis Okeyia, who is the team’s leading scorer, will not be in uniform as he is spending time with his family during the Christmas holiday.

Okeyia is one of the two players from the United Kingdom on the Springwood roster, and he is part of the boarding school system that Springwood has in place. This means he does not get to see his family often.

“He was a little upset he was going to miss,” Sampson said. “He wanted to try and rearrange his flights, and we told him that family is more important than basketball, and he needs to take time with his family.”

In at least two games this season, he has scored more than 20 points.

The boys come into the rivalry much improved from where they were at this point last year, and Chambers Academy’s boys head coach Jason Allen knows it.

Allen and Sampson are very familiar with each other as Allen’s son Peyton plays for the Auburn Raptors AAU team, which Sampson runs.

“We’ve got our hands full for sure,” Sampson said.