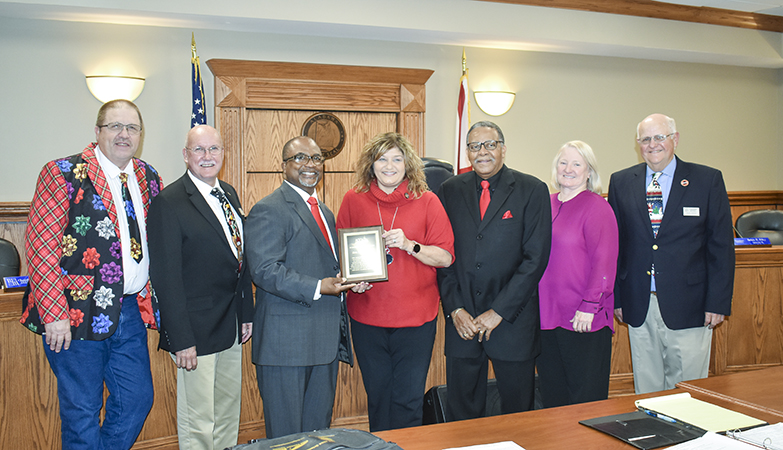 LaFAYETTE — State Rep. Debbie Wood was honored by her former board Monday night for her work in the Alabama House of Representatives.

The Chambers County Commission gave Wood an award for the passing of Act 2019-70, which was a technology bill to upgrade 911 technology in Alabama.

“In grateful appreciation to Debbie Wood for her dedication and service to county government in Alabama through the House, sponsoring the passing act 2019-70, guaranteeing statewide utilization of 911 technology, to better protect and serve Alabama residents,” Chambers County Chairman Doug Jones said when presenting the award.

The act sponsored by Wood gives the state 911 board the ability to administer the Alabama Next Generation Emergency Network, which is a communication technology system designed to streamline the routing process for 911 calls, reduce costs for 911 districts and improve accuracy and redundancy issues in the current system.

The law was passed on July 1.

Wood said it was an honor to receive the award from the county commission, where she served for 16 years.

Royster outlined the past couple months at the chamber, highlighting first that universal classes are still running.

Universal Class is an online-based continuing education software that allows anyone in Chambers County and the Greater Valley Area access to classes at no additional charge. The chamber is in a partnership with the Chambers County-Bradshaw Library and provides more than 500 online courses ranging from baking to the history of the Second World War.

Royster also talked about its ongoing effort to acknowledge a child from the Boys and Girls Club of Chambers County each month with a certification and a gift card to a local restaurant.

The chamber’s ambassador program is strong, according to Royster with 16 community ambassadors and 44 students as junior ambassadors representing all high schools in the region.

On Dec. 7, 16 junior ambassadors were certified in CPR training from Lanett Fire and EMS during a training session at the chamber office.

Royster has launched a new program within the chamber called “Catch Up with Coffee,” which will be a quarterly program at a local business where residents can meet with chamber members. The first one was a Jack’s in LaFayette on Dec. 12. The next one is scheduled for March 12 at Daylight Donuts in Lanett.

Royster said about 20 people showed up to the first event, which she considered a good turnout.