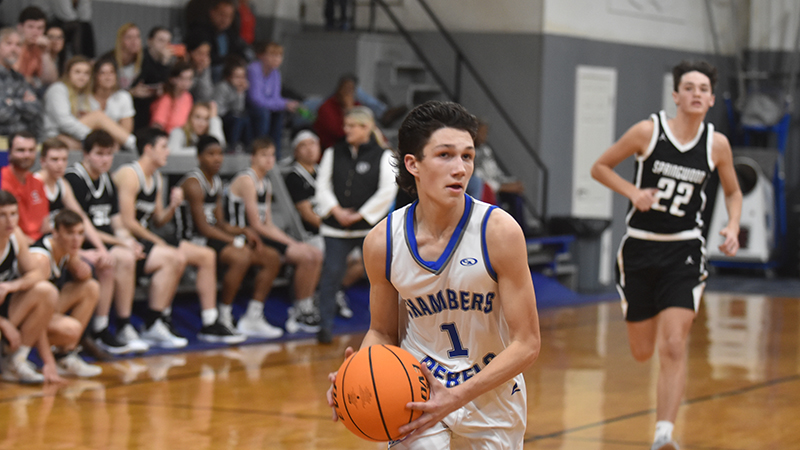 Guard Josh Holliday drives towards the basket on a fast break attempt in Chambers Academy’s win against Springwood.-- Photo by Cody Estremera

The Chambers Academy boys basketball team came out slow to start the game, but it gained the lead early against rival Springwood and never looked back, winning 47-29 on Friday night.

In the first quarter, the Rebels struggled to find their offensive consistency, as they struggled to hit any shots from the outside. This trend continued for most of the game.

“We got some good looks in the first half, but it was like there was a lid on there,” Chambers head coach Jason Allen said. “We’re coming off Christmas break, we have giblet gravy on our fingers and cranberry sauce. I was proud of how hard our kids competed.”

The bright spot of the first quarter was the Rebels’ defense, as they allowed only one made shot the entire eight-minute span. The one made shot was a three by Tyler Ly.

The Wildcats struggled to shoot the entire game. By halftime, they had only scored 12 points.

There were two key reasons. The first being the Rebels defense clogging the passing lanes and swarming the post.

“We focus on playing great man-to-man defense and not giving you anything easy,” Allen said.

The second was the loss of senior Francis Okeyia, who missed the game because of the holiday break. Okeyia is the team’s best offensive weapon.

This caused Springwood head coach Lisa Sampson to try and find other ways to score.

“I was just looking for a spark both defensively and offensively,” Sampson said. “With Francis not being here, we had to try and do a little bit different rotation.”

Chambers center Raphe Daniel was a force on the inside. The senior was constantly getting inside the lane, collecting offensive rebounds and putting up shots. He finished with eight points.

“I told him he’s a horse down there,” Jason said. “I apologized to him after the game. I said ‘son, we need to get you the ball more. We’re 0-for-20 beyond the three-point line and you’re in there dominating.’… He brings it every night. That kid is an animal on the boards.”

Coleman Hull was the leading scorer for Springwood, finishing with seven points. Only three Wildcats made multiple shots.

“We have no confidence in scoring the ball,” Samson said. “That has to change quick.”