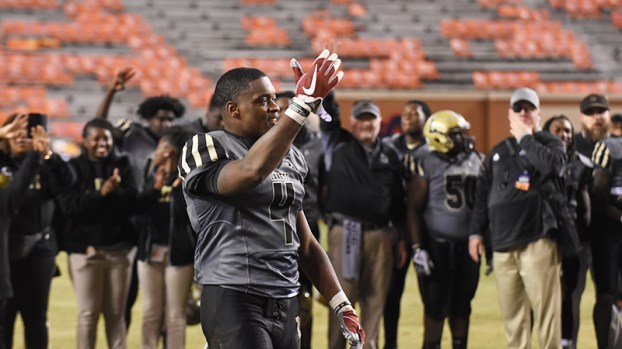 The 6-foot-1 senior was selected as the athlete of the offense.

Since finishing his high school football career, Story has been named Gatorade Alabama Football Player of the Year and is in the running for Mr. Football for the state of Alabama.

”Some evaluators are turned off by the jack of all trades, master of none Story appears to be, but when factoring in varsity time in multiple sports and the lack of focus on any one position for most of his football life, it plays more as intrigue for us,” the article written by John Garcia Jr. reads. “We have seen Story dominate games on both sides of the football with instincts, physicality and developed skill both with the ball in his hands or in attacking it.”

Garcia believes Story should be a receiver at the next level because of how explosive he is with the ball. Most are predicting him to play safety in college.

Story is one of two players from the state of Alabama selected, as Central’s Javion Cochen also made the list as an offensive lineman.

Cohen and Story are joined by fellow Alabama commit Bryce Young. The Crimson Tide have three current commits on the team, which is tied with Ohio State for prospects on the list.

Story is set to sign his official letter of intent on Wednesday at 1:15 p.m. EST in the Lanett auditorium.

Early in the first half, the Lanett junior-high girls basketball team was in complete control as the Panthers cruised to... read more