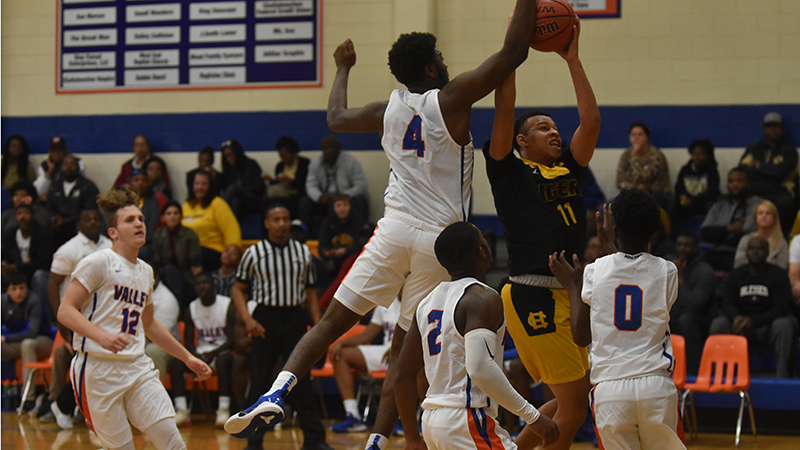 playing above the rim: Center Justiss Burton comes in from behind to block a shot in Valley’s 72-58 loss on Monday night. -- Cody Estremera

The game could not have gotten off to a worse start for the Valley boys’ varsity team in its 72-58 loss to Harris County on Monday night.

Just like in the girls’ game, the Rams struggled against the full-court trap. This led to a nine-point deficit at the end of the eight-minute opening period.

The gap between the two teams continued to grow until about halfway through the second quarter, getting as large as 21 points.

Then the Rams figured out how to get around the trap.

“It’s nothing new, just guys weren’t playing in their spots,” Valley head coach Marshon Harper said. “Just had to figure out what spots to be in and move the ball around.”

Once they started to figure out the trap, the Rams were playing up-tempo and scoring at ease. They went on a 9-2 run to cut the deficit to 14, mainly by forcing turnovers and being able to set up their defense on the other end of the floor.

“I think we were sharing the ball, instead of playing one-on-one ball,” Harper said. “Other players were getting layups instead of just the main guys.”

For most of the third quarter, the Rams were in control, cutting the deficit to as little as two points.

“[At halftime], I was just trying to motivate them,” Harper said. “They were hitting every shot. I told them it wasn’t going to last. Just told them to keep on fighting.”

The game was tight for most of the final quarter but with about four minutes left in the game, Valley just couldn’t keep up the pace, fading down the stretch.

“Just need to get a little more from the bench,” Harper said. “I had some kids play a lot of minutes… It’s a learning experience.”

Jacquez Trammell starred for the Rams. He finished with 17 points, five rebounds and 4 assists. He finished 7-of-7 from the field. Kalen Sherrell added 13 points. Junior Demarice Farrow finished with nine points, scoring all nine from behind the arc.

The Rams are back in action on Tuesday night, when they host Bullock County. The first of three games is set for 4:30 p.m.