Valley girls hold on against LaFayette 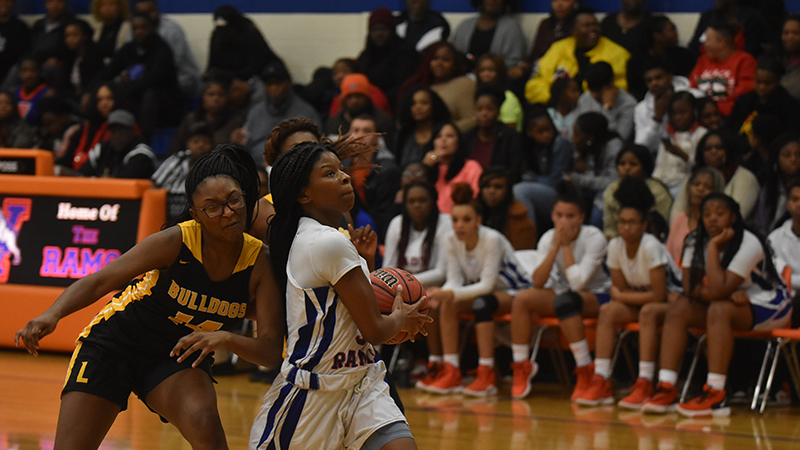 With seconds left in the game, the Valley girls team had a chance to seal the game against rival LaFayette, as it was at the free throw line up three.

The Rams missed the shot, leading to a Bulldog rebound. They charged down court, heaving the game-tying three. The shot fell but was waived off, since the clock had expired before the shot. The Rams won 39-36.

“I saw heart,” assistant coach Trish Watson said. “They knew they had to play hard to win this game. It was like an Iron Bowl, who wants it. We had the heart for it, so we came out with the win.”

A big fourth-quarter key for the Rams was sophomore Jayla Lancaster. Entering the final quarter, she had four points. In the final eight minutes, she scored six of the team’s nine points, including the game’s final score.

“She’s still got a long way to go, but each time she plays, we see improvements in her,” Watson said. “The future looks bright. When she’s a senior, Lord have mercy on anybody that plays against that child.”

Defensively, Valley came into the game knowing it had to stop Feliah Greer, or at least slow her down. Greer finished a game-high 20 points, but the Rams made her earn nearly every point, sending the junior to the free throw line 14 times. She scored 12 points in the second half, six of which came from the free throw line.

Throughout most of the game, the Bulldogs kept the Rams off balance, running a half-court man-to-man defense with Greer playing a full-court press on the inbound.

“We just kind of did what we always do [run man-to-man defense],” LaFayette head coach Fred Bridges said. “In our concept, we live and we die by it. It worked well for us, but we still have things we need to work out.”

Watson told her girls to slow down and find holes. They were able to find those holes in the second half.

When they weren’t going slow, the Rams were throwing quick outlet passes on rebounds or even right after the inbound pass.

“We knew we were getting beat, so we made some adjustments,” Bridges said. “We had a full-court man-to-man and only had one back on the safety net. Some cases it worked really well for us. Some chances it didn’t.”

For the first time this week, the Rams failed to get to the free throw line more than 10 times, finishing 4-of-8 from the charity strike.

Alahbra’J Todd and Monkeliyah Morgan were the only other two Bulldogs to score. Todd had 14, including a pair of threes, while Morgan had two, scoring both from the free throw line.

The Rams are back in action on Dec. 17 when they travel to Smiths Station, while the Bulldogs host Bullock County on Saturday, playing its third game in three days.