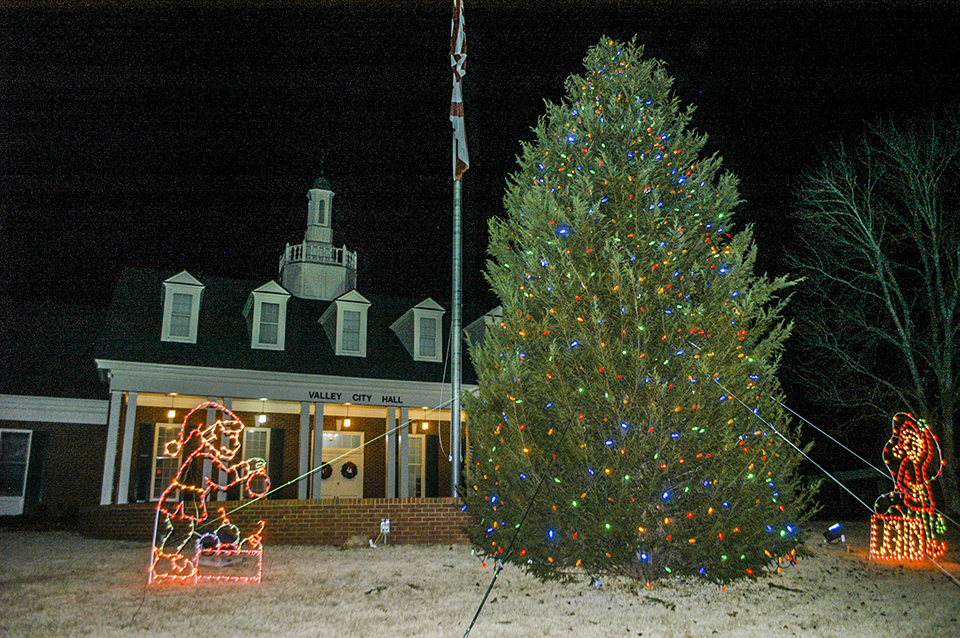 A Christmas tree was lit up during a ceremony Monday night in front of Valley City Hall.

VALLEY — The Valley City Council on Monday gave final approval to a land sale and had their annual Christmas tree lighting ceremony in front of city hall.

The council held a second reading and approved an ordinance to sell approximately 40 acres of land off Combs Road to Chris Clark Properties, LLC. The land is planned for development as a subdivision. At its full build out, the new subdivision will likely add several hundred moderately-priced new homes to the city.

The property sale does have two restrictions: that any new home built at the site be at least 1,400 square feet with a carport, and that the site is subject to zoning by the city council and the city’s planning commission.

Public Works Director Patrick Bolt told the council that his department had burned some brush piles off Combs Road and that several more needed to be burned. Over the past several years, the Public Works Department has cleared off more than 1,000 acres of city-owned property just off I-85.

Bolt said that a lot of work has been taking place on Valley Industrial Park Drive and that the four-lane road behind the Lanier-Carter site is ready to be resurfaced. Making improvements to the road is one of the city’s top infrastructure projects for the 2019-20 fiscal year.

“We could start paving tomorrow,” Bolt said. “We have had problems there with ground water. We need to have a storm drain there that’s not sitting next to the road.”

Valley Parks & Recreation Director Laurie Blount said that opening day on Sunday had been a very busy one at the Christmas Merry Go Round.

“The weather was perfect, and there was a really good turnout,” she said. “It was a very, very good day.”

Blount said people can keep up with the days and times Santa will be at the Merry Go Round. He should be there on the weekends.

Blount reminded everyone that this year’s Valleywide Christmas Parade would take place at 6 p.m. EST on Thursday, Dec. 12. It will follow the same route it has taken in recent years, rolling out from the Cherry Valley Center parking lot through downtown West Point past Point University and Capital City Bank, where it turns right onto Highway 29 and makes the long route through West Point and Lanett to Valley, where the parade disbands in the parking lot at Walmart.

Blount had some good news to report about the Valley Area Swim Team (VAST).

“Valley High is going to have a swim team next year,” she said. “Our swimmers can continue competing at the high school level.”

“We want people to turn out for the parade and don’t litter the site,” Council Member Jim Clark said. “Have a good time, but make sure everything has been picked up when you leave.”

Council Member Henry Cooper congratulated the Lanett High Panthers on their 1A playoff run this year and wished them well in Thursday’s state championship game versus Mars Hill Bible.

“I commend Coach Clifford Story on the job he has done with that program,” Cooper said. “Everyone from Chambers County should support them in Thursday’s game.”

Following the council meeting, Police Chief Tommy Weldon led everyone in singing “O Come All Ye Faithful,” “Silent Night” and “We Wish You a Merry Christmas,” just behind the 33-foot-tall Leyland cypress that’s this year’s tree.

“All right, let’s light her up,” Mayor Riley said.

With that, the tree, a huge “Merry Christmas” display and some elves lit up the night along with all the lights on utility poles, the Langdale Nativity and the Madonna and Christ Child.