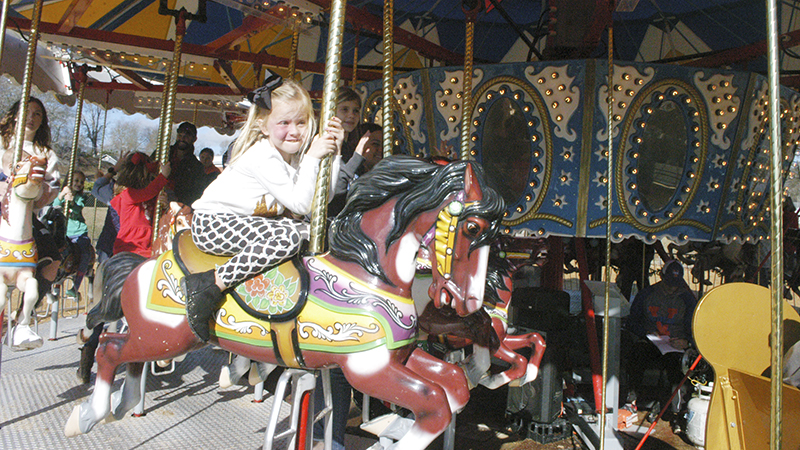 The Christmas Merry Go Round was a busy place on Christmas Eve. --Wayne Clark

VALLEY — The 63rd running of the Christmas Merry Go Round ended at 5 p.m. on Christmas Eve. Despite having a shorter season than normal due to Thanksgiving being late this year on the calendar and having some bad weather days, the turnouts were very good. Sometimes on the weekends, the line would back up across the pedestrian bridge on the CV Railway Trail. A highlight of this season was having a three millionth rider to take part in this long-standing holiday tradition. At approximately 2:30 p.m. on Sunday, Dec. 15 seven-year-old Ethan King of Lanett was recognized for being number three million. He and his family received some prizes, including a $100 gift card to Walmart.

Working the merry-go-round on Christmas Eve were Bobby Poer, Chuck Rudd and Lantorrance Rudd of Valley Parks and Recreation. Other VPR employees taking turns on other shifts were VPR Director Laurie Blount, Mark Hudmon, Brody Thomas, Toby Sides, Cooter Williams and the venerable Roger McDonald, who has worked the merry-go-round every Christmas season since 1958.

Also contributing to the holiday fun was Ballard Party Rentals of Beulah, who provided rides on the CV Trail aboard a miniature train, inflatables, and rides on a mechanical bull. King Jumpers had their Gyro ride set up next to the trail.

“We love being here,” said Christian Cason of Ballard Party Rentals. “We couldn’t have our inflatables here today (Christmas Eve) because of the wet grounds, but we are having rides on our train and our Galaxy mechanical bull. The Galaxy is very safe. It’s the only type of mechanical bull insurance will cover. Sometimes people fall off of our bull, but no one has ever been hurt. It moves slow and there’s lots of padding to break a fall. It’s safe for everyone from children to adults. We’ve had Sid Lockhart, Jerome Bailey and even Santa Claus to ride it. We’ve taken it to rodeos, family reunions and charity events. Everyone loves to ride that bull. We love coming to the merry-go-round. We love seeing so many people having a good time.”

Amelia has family connections to the Valley. Her grandmother, Detra, is originally from the Valley and the daughter of Casper Brown, who was a member of the Brown Brothers Quartet. “We want to start a new Christmas tradition for Amelia,” she said. “Riding the merry-go-round is something we always did when we were growing up, and we are glad she is doing it too. She was born at 9:58 a.m. on Christmas Day last year.”

Detra said that her brother and sister-in-law, Keith and Teresa Brown had raised daughters Erica and Monica on the merry-go-round. Their children, Jackson and Bailey Ann, are now into this continuing tradition.

Nine-year-old Chloe Miller, daughter of Robert and Jennifer Miller of Beulah, was proud of the fact she could take an extended ride on the Gyro on Christmas Eve morning and get off without being dizzy.