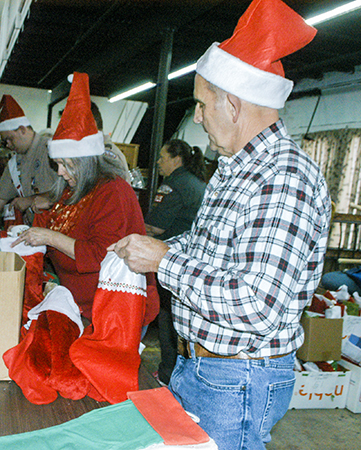 Valley residents to give away hundreds of stockings to seniors

VALLEY — This is the big week for Ray and Jackie Edwards annual Christmas stocking program. It’s something they plan for all year. This year they will be giving away a total of 350 Christmas stockings to seniors throughout the local area.

On Tuesday, a big group of volunteers, including Timeless Antiques owner Carol Falconer, Commissioner Debra Riley, and Boy Scouts from the Wehadkee Chapter of the Order of the Arrow, filled those stockings with fruit, candy, small gifts and an individually signed Christmas card from the Edwards.

“We are doing 350 this year,” said Ray Edwards. “This is our 28th year of doing this, and this will be the most we have given away in a single year. We love doing this and hope to keep doing it with each Christmas season.”

“Some of the stockings have small Christmas cakes, and some have work gloves,” Edwards said. “We will get started at the LaFayette Senior Center on Wednesday. We’ll be giving away 30 stockings there. We’ll be at the West Point Active Life Center on Thursday and will be giving away 40 stockings. We hope to see Mayor Steve Tramell there. At 10:30 on Friday morning we will be giving out 45 Christmas stockings in Lanett. An hour later we will be at the Valley Senior Center, where we will give out 52 stockings.”

On Friday morning, a total of 110 stockings will be delivered to homebound seniors in Valley who receive meals from city buses making the home delivery route.

“We will also be going to Sylvia Word Manor, Valley Park Manor and to the Lanier Nursing Home,” Edwards said.

Serving as Edwards’ right-hand man through the process is his ten-year-old great grandson Gavin Walden.

“He loves being Santa’s helper every year,” Edwards said. “He wants this to keep this going year after year. He will be running it one day.”

Edwards credits Falcomer for having done a great job in getting an assembly line organized in the back of Timeless Antiques.

“Miss Carol did a great job,” he said. “She had everything organized and with close to 15 people working the line we were finished in no time at all.”

“We did it in record time,” Falconer said.

Her eight-year-old CharPei mix, Tou, wore reindeer antlers and was the mascot for the annual stocking stuffing.

Beulah girls dominate in second half

After trailing for the entire first half, the Beulah girls varsity team took its first lead with 40 seconds left... read more